Presentation on theme: " Plague, economic crisis, and the decline of the Catholic Church were not the only problems of the late Middle Ages.  The 100 Years’ War was the most."— Presentation transcript:

2  Plague, economic crisis, and the decline of the Catholic Church were not the only problems of the late Middle Ages.  The 100 Years’ War was the most violent struggle during this period.

3  13 th century, England still held the duchy of Gascony in France. English king even pledged his loyalty as a vassal to the French king.  However, when King Philip VI of France seized Gascony in 1337 in an attempt to take it back. King Edward III of England declared war.

4  The French relied on heavily armed noble cavalry men. The English did as well, but relied more on large numbers of paid peasant foot soldiers.

5  First major battle, in 1346 in Crecy. The \ larger French army simply attacked the English disorderly. The English devastated them.  The battle was not decisive, the English simply did not have enough resources to conquer all of France, but they continued to try

6  The battle of Agincourt in 1415, the heavy armor-plated French knights tried to attack Henry’s forces across a field turned to mud. They were disastrously defeated, and 1500 French nobles died on the battlefield.  The English were masters of northern France. The other 2/3rds of France now fell into the hands of the timid King Charles.

7  Joan was born in 1412, the daughter of prosperous peasants. She was a deeply religious person who experienced visions and came to believe her favorite saints had commanded her to free France.

8  1429, Joan made her way to Charles’s court, where she persuaded him to allow her to accompany a French army to Orleans. Inspired by Joan’s faith, the French armies found new confidence in themselves and captured Orleans.

9  Joan brought the war to a decisive turning point. She was captured in 1430 and turned over by the English to the Inquisition and charged with witchcraft.  She was condemned to death as a heretic.  Defeats of English armies in Normandy and Aquitaine led to the French victory by 1453.

10  In the 14 th century, European rulers faced serious problems. Many hereditary monarchies in Europe were unable to produce a male heir.  The founders of new dynasties had to fight for their positions.  Rulers found themselves with financial problems as well.

11  England: the cost of the war and losses in manpower strained the economy. Civil conflicts- War of the Roses- caused even greater turmoil: Noble factions fought to control the monarchy until 1485, when Henry Tudor established a new dynasty.  As the first Tudor king Henry VII worked on to create a strong royal government. He ended the war with the nobility by taking away their private armies. Was thrifty, and did not over tax the lower classes.

12  France: devastated from the 100 Years War, but developed a strong degree of French national feeling, thus reestablishing a royal power.  Spain: experienced the growth of a strong national monarchy at the end of the 15 th century. The Muslims had taken most of Spain by 725. When Isabella of Castile married Ferdinand of Aragon in 1469,it was a major step toward unifying Spain.

13  Ferdinand and Isabella also pursued a policy of strict conformity to Catholicism. In 1492, they expelled all professed Jews from Spain, and urged Muslims to convert. In 1502 Isabella kicked all professed Muslims out. From then on to be Spanish was to be Catholic.

Download ppt " Plague, economic crisis, and the decline of the Catholic Church were not the only problems of the late Middle Ages.  The 100 Years’ War was the most." 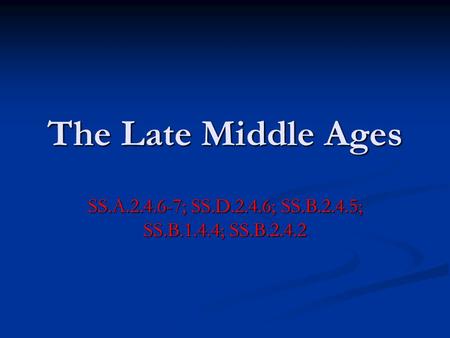 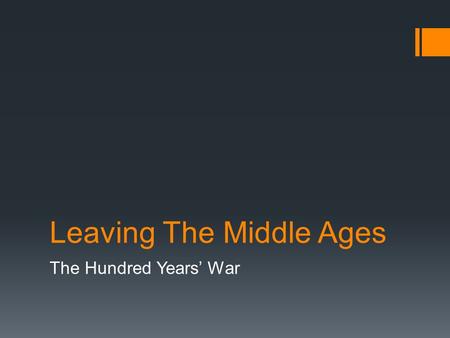