3 – The French decided that the regent was the rightful heir and he was crowned as Philip VI Edward felt that he was the rightful heir King Philip tried to gain back the duchy of Gascony, one of the last possessions that England still had in France – Due to all of this, Edward declared war on France and invaded with an army in 1337, starting the war The war started out with a lot of knights who viewed battle as a chance to show of their skills – However, the Hundred Years’ War was a turning point in the nature of warfare – Peasant foot soldiers, not knights, won the major battles in this war

5 The French relied heavily on armed noble knights – Peasants were socially inferior The English also used knights, but they relied more on large numbers of peasants, who were paid to be foot soldiers – English foot soldiers were armed not only with pikes, but also the deadly longbow – It had great striking power, long range, and a rapid rate of fire The first major battle was at Crecy in 1346 – The French followed no battle plan, just simply attacked – The English archers devastated the French knights

6 At the Battle of Agincourt (1415) 1500 French nobles died on the battlefield – The English won victory after victory and now controlled northern France – The English, under King Henry V, advanced all the way to the gates of Paris – The dauphin (heir to the French throne), Charles, didn’t own enough of France to be crowned as king A French peasant girl named Joan of Arc came to the aid of France and her ruler Charles in 1429 – She was born in 1412 to prosperous parents and was deeply religious – She believed that her favorite saints had commanded her to free France by leading the French into battle

7 She made her way to court and Charles allowed her to accompany the army to Orleans – Joan’s army defeated a huge English army – She led the French in several more victories – Joan brought the war to a decisive turning point by inspiring people with her faith Joan was captured in 1430 and turned over to the English – The English tried her for witchcraft and condemned her as a heretic – Joan was then burned at the stake After her death, King Charles VII rallied his army and fought on

9 – They defeated the English at Normandy and Aquitaine, finally winning the war in 1453 – French success was helped by the use of gunpowder and the cannon

11 THE WAR OF THE ROSES Civil war between the houses of York and Lancaster over the crown of England – The house of York had a white rose as their emblem – The house of Lancaster had a red rose The crown will pass back and forth between the two families for several decades – The Battle of Bosworth Field in 1485 ended the civil war and saw the crowning of a new king Henry VII united the two houses by marrying a princess of the house of York and ending the war – Elizabeth was the daughter of the late Edward IV – Henry had her declared legitimate – Their son, Henry VIII, was heir to both houses

13 The Black Death A devastating plague that ravaged Europe from 1347 to 1351 – Not only Europe, but also China, Central Asia, and North Africa Most devastating natural disaster in European history, with one-third of the population dying The most common form of the Black Death was the bubonic plague – This was usually spread by fleas that lived on rats – Another form was called the pneumonic plague and it was spread through the air by personal contact

15 Most historians think it started in 1346 when Mongol armies laying siege to a Black Sea port became sick with the plague – From there infected rats and fleas got onto ships – It usually followed trade routes The Black Death was almost always fatal – First sign of infection was the development of large dark splotches on the skin – Other symptoms usually appeared, such as high fever, vomiting, and severe headaches – Most people died within a few days Many people believed the plague was a punishment sent by God

16 The plague led to an outbreak of anti-Semitism (hostility towards Jews) and persecution was the worst in Germany The death of so many people had numerous consequences: population declined and lowered the demand for food, which resulted in falling prices – Landlords were paying more for labor as their incomes decreased – This all started to bring the downfall of the manorial system

18 Houses in the cities were crowded together and tall enough that they blocked the sunlight – Streets were narrow and winding, and usually filled with animal and human waste – These cities were dirty and smelled bad – Fire was a great danger because houses were wooden – Disease and crime were also problems 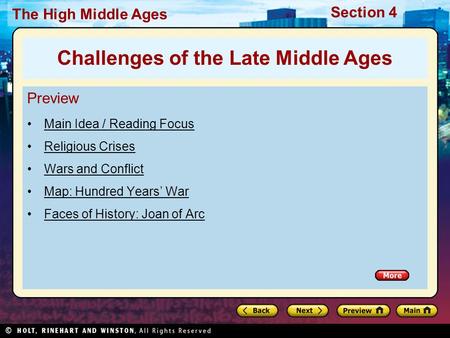 Challenges of the Late Middle Ages 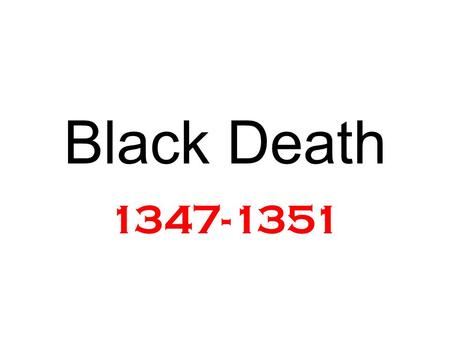 Black Death Black Death "It was dark before I could get home, and so land at Churchyard stairs, where to my great trouble I met a dead corps.