1 CHAPTER 6.5 THE LATE MIDDLE AGES
I. The Black Death A. A Plague is a disease that spreads quickly and kills many people. The Black Death was a plague that spread throughout Europe and Asia in the late Middle Ages. B. Historians believe the Mongol Empire was partly responsible for the rapid spread of the plague because they opened up trade between China, India, the Middle East, and Europe. Rats carrying the plague were brought on trading caravans to Europe.

2 C. The first outbreak of the plague began in Caffa, a city on the Black Sea.
D. About 38 million Europeans died of the Black Death between 1347 and The deaths of so many people damaged the economy. It weakened the feudal system. Interesting note: Some scientist today believe the Black Death might have not been Plague but a form of Ebola.

3 THE PLAGUE MOVES WEST TOWARD EUROPE

4 II. A Troubled Continent
A. The Hundred Years’ War began after Edward III angered the French by declaring himself king of France in The first major battle of the war occurred at Crecy. "...their horses stumbled among the stakes, and they were speedily slain by the archers." - French Defeat at Crecy

6 THE ENGLISH LONGBOW A weapon that would change history…

7 The French charged into the English and Welsh Longbowmen
Holding the high ground leading to a French slaughter. The entire French army was under constant arrow attack.

8 JOAN OF ARC B. A French peasant girl fought with the French army during the Hundred Years’ War. The English captured the girl and had her tried by the Inquisition. She was burned at the stake in She was known as Joan of Arc. "...their horses stumbled among the stakes, and they were speedily slain by the archers." - French Defeat at Crecy

14 C. The French finally defeated the English in 1453.
D. After a civil war in England called the Wars of the Roses, Henry Tudor was crowned Henry VII. E. During the middle ages Muslims ruled most of Spain and Portugal (the Iberian Peninsula), the people of these countries were mostly Christians. F. Though the Muslims accepted the Jews and Christians, the Christians resented Muslim rule. The Reconquista was the Christians’ struggle to retake Spain and Portugal G. Princess Isabella of Castile married Prince Ferdinand of Aragon. As king and queen, they later united their two territories into one country called Spain. 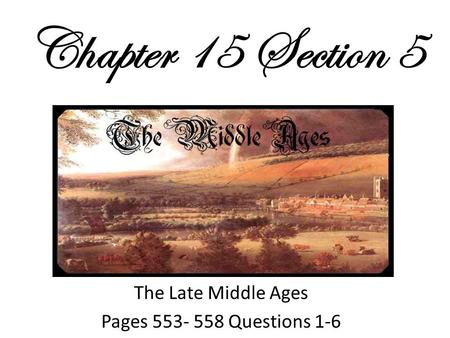