Presentation on theme: "Chapter 13 Energy. Ch 13.1 – What is Energy? A.Energy is the ability to do work and cause change."— Presentation transcript:

8 4. Electrical Energy – energy from electricity = flowing electrons; examples include lightening and the energy moving through wires of appliances

9 5. Nuclear Energy – contained within the nucleus of an atom holding together the protons and neutrons; can be released in nuclear power plants to generate electricity

11 C. Energy can be transferred from kinetic to potential and back to kinetic a) Ex: tossing a ball up in the air

12 D. Machines transform energy from one form to another

13 1. Chemical energy can be transferred to kinetic, radiant or thermal

14 2. Electrical energy can be transformed to kinetic, chemical, electrical or thermal

18 4. Unlike other forms of energy, thermal energy is not easy to store because it is constantly moving from areas of higher amounts to lesser amounts

19 Ch 13.3 – Sources of Energy A. All energy comes from the Sun or radioactive atoms inside the Earth

21 3. Considered nonrenewable resources because they are being used up faster than replaced a) Coal reserve 200-300 more years b) Oil & Natural Gas reserves 30-60 years

22 4. Pollution is caused by burning fossil fuels (in cars, factories etc.) a) Acid Rain – caused from gases released by burning coal or oil which mix with water vapor in the air

24 C. Alternate (Inexhaustible) Energy Resources 1. Solar Energy – energy from the Sun a) Solar energy can be captured in photovoltaic cells and be converted into electricity b) The Sun produces enough energy in 15 minutes to provide world with electricity for a whole year

26 2. Wind Energy – uses windmills (windfarms) a) Can generate electricity without pollution b) Wind not steadily available in all locations

27 3. Hydroelectric Energy – from water a) Dams make use of potential energy

30 D. Energy Conservation 1. We must help conserve energy in order to prevent shortages and allow fossil fuels to last longer

Download ppt "Chapter 13 Energy. Ch 13.1 – What is Energy? A.Energy is the ability to do work and cause change." 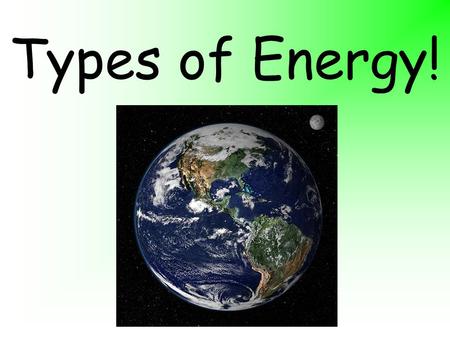 Types of Energy!. What is energy? Energy is the ability to cause change (or to do work) 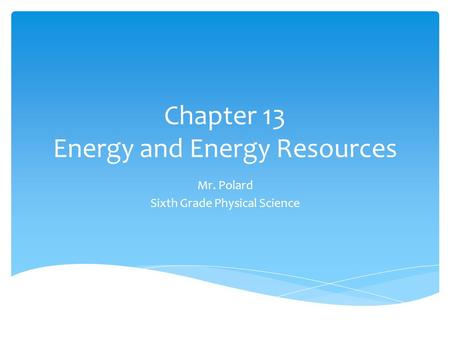 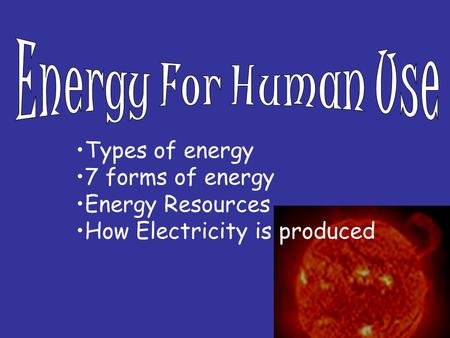 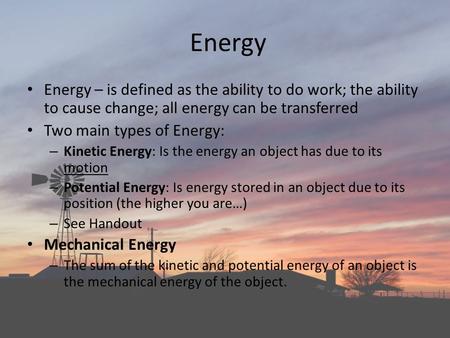