2 Sources of Energy 3 Energy Resources The surface of Earth receives energy from two sources—the Sun and radioactive atoms in Earth’s interior. Nearly all the energy you used today can be traced to the Sun, even the gasoline used to power the car or school bus you came to school in.

4 Sources of Energy 3 Fossil Fuels Coal was formed by similar process from the remains of ancient plants that once lived on land.

5 Sources of Energy 3 Using Fossil Fuels It takes millions of years to replace each drop of gasoline and each lump of coal that is burned. An energy source that is used up much faster than it can be replaced is a nonrenewable resource. Fossil fuels are nonrenewable resources.

6 Sources of Energy 3 Using Fossil Fuels Burning fossil fuels to produce energy also generates chemical compounds that cause pollution. Each year billions of kilograms of air pollutants are produced by burning fossil fuels. These pollutants can cause respiratory illness and acid rain.

7 Sources of Energy 3 Nuclear Energy To obtain electrical energy from nuclear energy, a series of energy transformations must occur.

9 Sources of Energy 3 Nuclear Wastes Like all energy sources, nuclear energy has its advantages and disadvantages. One disadvantage is the amount of uranium in Earth’s crust is nonrenewable. Another is that the waste produced by nuclear power plants is radioactive and can be dangerous to living things.

10 Sources of Energy 3 Nuclear Wastes As a result the waste must be stored so no radioactivity is released into the environment for a long time. One method is to seal the waste in a ceramic material, place the ceramic in protective containers, and then bury the containers far underground.

11 Sources of Energy 3 Hydroelectricity Currently, transforming the potential energy of water that is trapped behind dams supplies the world with almost 20 percent of its electrical energy.

13 Sources of Energy 3 Hydroelectricity Although production of hydroelectricity is largely pollution free, it has one major problem. It disrupts the life cycle of aquatic animals, especially fish. This is particularly true in the Northwest where salmon spawn and run. In attempt to help fish bypass some dams, fish ladders are being installed.

15 Sources of Energy 3 Solar Energy The Sun is the origin of almost all the energy that is used on Earth. Because the Sun will go on producing an enormous amount of energy for billions of years, the Sun is an inexhaustible source of energy. An inexhaustible resource is an energy source that can’t be used up by humans.

16 Sources of Energy 3 Solar Energy Less than 0.1 percent of the energy used in the United States comes directly from the Sun. One reason is that solar energy is more expensive to use than fossil fuels.

20 Sources of Energy 3 Geothermal Energy At some places deep within Earth the temperature is hot enough to melt rock. This molten rock, or magma, can rise up and close to the surface through cracks in the crust. In other places, magma gets close to the surface and heats the rock around it.

21 Geothermal Reservoirs
Sources of Energy 3 Geothermal Reservoirs In some regions where magma is close to the surface, rainwater and water from melted snow can seep down to the hot rock through cracks and other openings in Earth’s surface. The water then becomes hot and sometimes can form steam. In some places, the hot water and steam are close enough to the surface to form hot springs and geysers.

25 Sources of Energy 3 Heat Pumps A heat pump contains a water-filled loop of pipe that is buried to a depth where the temperature is nearly constant. In summer the air is warmer than this underground temperature. Warm water from the building is pumped through the pipe down into the ground.

26 Sources of Energy 3 Heat Pumps The water cools and then is pumped back to the house where it absorbs more heat, and the cycle is repeated. During the winter, the air is cooler than the ground below. Then, cool water absorbs heat from the ground and releases it into the house.

27 Sources of Energy 3 Energy from the Oceans The rise and fall in the ocean level is called a tide. The constant movement of the ocean is an inexhaustible source of mechanical energy that can be converted into electric energy.

28 Sources of Energy 3 Using Tidal Energy A high tide and a low tide each occur about twice a day. A tidal power plant can generate electricity when the tide is coming in and going out.

29 Sources of Energy 3 Using Tidal Energy As the tide comes in, it turns a turbine connected to a generator. When high tide occurs, gates are closed that trap water behind a dam.

30 Sources of Energy 3 Using Tidal Energy As the tide goes out and the ocean level drops, the gates are opened and water from behind the dam flows through the turbine, causing it to spin and turn a generator.

31 Sources of Energy 3 Using Tidal Energy While tidal energy is a nonpolluting, inexhaustible energy source, its use is limited. Only in a few places is the difference between high and low tide large enough to enable a large electric power plant to be built.

32 Sources of Energy 3 Wind Modern windmills convert the kinetic energy of the wind to electrical energy. The propeller is connected to a generator so that electrical energy is generated when wind spins the propeller. Some disadvantages are that windmills produce noise and that large areas of land are needed.

33 Sources of Energy 3 Conserving Energy One way to make the supply of fossil fuels last longer is to use less energy. Reducing the use of energy is called conserving energy.

35 Section Check 3 Answer All the energy we use on earth comes directly or indirectly from the Sun. This includes energy sources such as oil and natural gas, which trap radiant energy that came from the Sun long ago.

37 Section Check 3 Answer Three types of fossil fuel are coal, oil, and natural gas. Fossil fuels are nonrenewable resources, which means that they can’t be replaced by natural means in a short period of time.

39 Section Check 3 Answer The answer is D. Thermal energy of water is transformed into the kinetic energy of steam. 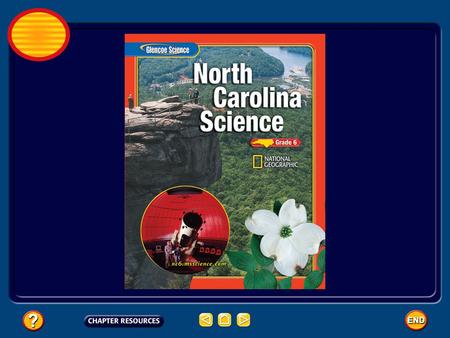 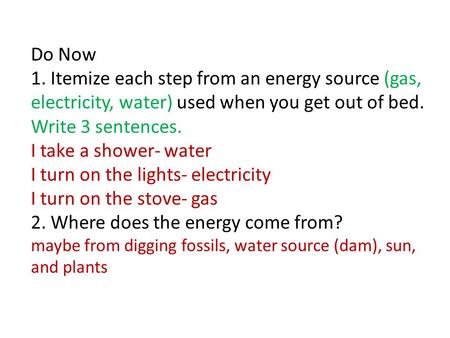