Presentation on theme: "By Joseph Rogers. At the start of production for my magazine I made sure my masthead was eye catching just like the ones seen on big branded magazines."— Presentation transcript:

2 At the start of production for my magazine I made sure my masthead was eye catching just like the ones seen on big branded magazines such as EMI. With my front cover I made sure that my front cover had an unique eye catching image which helped due to my models retro look. I also made sure to highlight artist names to make it eye catching informing reader there is info in this magazine about these artists. A similar method is used in the contents page where I have my model with a much bigger picture to stand out. And finally with my feature article I conformed to what is expected of a double page spread by having one main image Forms And Conventions

3  Big Bang represents the teenagers of today by standing out with what is new out there such as new trends which is picked up by big name artist; it relates towards the new big thing hence forth the magazine name “Big Bang”.  it relates towards teenagers as well as adults it has different styles such as a retro design or funky design it depends on who the main person is on the front cover and which design style suits them best.

4  The target audience for my magazine would be between both genders and age range from 16 and onwards presumably 16-26. In order to attract my target audience I used a collaboration of color which tied in with the magazine background. I also use a attractive font with a good fusion of a good magazine name “big bang” which attracts people who like big trends or things that are big in the media world

7 BEFOREAFTER I have learnt from feedback that there was numerous problems with my first double page spread I learnt that I needed to change the font as well as the text colour as it was not visible. However this was a problem because no matter what colour I changed it to the background made it hard to se the text so I realized in order for people to see the text properly I had to put it on a new back ground and minimize the picture as you can see.

8  I have learnt that lighting Is very important in photography I learnt how to cut out the pictures that I had taken on Photoshop.  The construction of my magazine helped me to learn more and improve my skills in Photoshop. I also learnt how to fuse my Photoshop pictures in to my word document where I improvised and created my magazine content page seeing as Photoshop is not designed to make a full magazine front cover with multiple images

Download ppt "By Joseph Rogers. At the start of production for my magazine I made sure my masthead was eye catching just like the ones seen on big branded magazines." 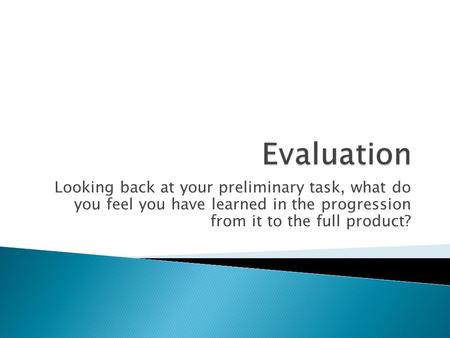