Presentation on theme: "27. Looking back on your preliminary task, what do you feel you have learnt in the progression from it to the full product?"— Presentation transcript:

1 27. Looking back on your preliminary task, what do you feel you have learnt in the progression from it to the full product?

2 There are 4 stages which you have to take when doing a magazine. Research, Planning, Construction and Evaluation.

3 Research For the College Magazine the only research I did was looking up other college magazines on Google. The was no research needed to make the college magazine where as I did a lot of research for my music magazine. I brought a magazine I aimed to base mine on which was Top Of The Pops and I analysed the front cover, contents page and double page spread. By analysing them I could properly dissect a professional and successful magazine in order to get an idea of what I could do with mine. I carried out a questionnaire before making my magazine in order to find out what my audience would like to see and then from the results made pie charts to show the popular answers. I also researched particular artists to see they’re background and how they got to where they are and how they dress and this helped me to base my artists on them.

4 Planning My College magazine did not take any planning as we just went out and took the photographs and put them all together where as with the music magazine I did sketches of how I would like my magazine front cover, contents page and double page spread to be structured. I also did a draft copy of the text for my Double Page Spread. This made my magazine far better than the College magazine I first made as it was neat and all fit in place. It meant I could focus on the graphics, images and fonts rather than the structure. I also did a photo schedule which contained the dates of which the photographs took place and so overall there was far more planning with the Music magazine.

5 Construction When it came to actually making the magazine they were both very different when it came to editing etc. With the College magazine I just made it where as with the music magazine I edited the images I used. I downloaded fonts from Dafont.com. I used more attractive colours and graphics like Cutting stars out of my text boxes to make it look more professional. I also took more time to construct the Music magazine to the College one. With the Double Page spread I also downloaded a brush on Photoshop to create my own background and make a colourful painted effect which improved my magazine. When it came to constructed I put more effort into making the music magazine because I had done more research and knew what the audience would want to see and tried to create it.

6 Evaluation When posting the draft of my music magazine I got feedback which then helped me to improve my magazine and even removing what didn’t work. I think that this feedback helped a lot because they could potentially be the audience so by telling me what they think it is constructive criticism. I then evaluated it myself and found that I changed certain things and built up my magazine around another one. With the College magazine I did none of this and did not get feedback. I feel that the feedback would have helped but looking at it I can see the difference the feedback makes because my music magazine is better than the college one. Here are some examples of the feedback I received.

Download ppt "27. Looking back on your preliminary task, what do you feel you have learnt in the progression from it to the full product?" 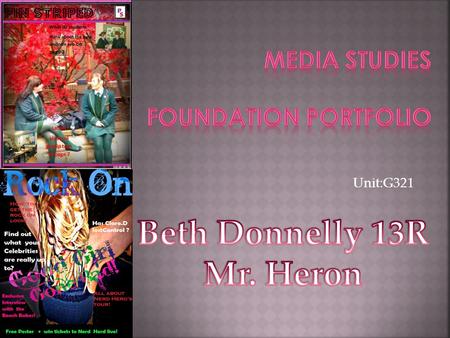 Unit:G321 My project for this year was to create two magazines. For my first task I was asked to design and create a front cover and content page for.