Presentation on theme: "Evaluation AS Media. How does your Media product use conventions On my music magazine I chose to not follow the normal conventions that are used in published."— Presentation transcript:

2 How does your Media product use conventions On my music magazine I chose to not follow the normal conventions that are used in published magazines such as VIBE and The Source. My music magazine is a unique form of a music magazine going against the convention. On my front cover I used a brick wall and made my image black and white to give a hard and street feel to it instead of giving it colour. My masthead is on the side of the magazine instead of putting it in the middle of the magazine. My typeface was all in impact so this also gives a hard and street feel to the magazine. My images for my music magazine are all in black and white this makes the images seem more urban. As a common convention all magazines contain barcodes so this why I have included a barcode on my magazine. For my magazine cover I used hooks and tearers but no slogans I thought slogans was not apropiate for my magazine this is because my magazine was a Hip Hop. I choose teasers because it gives a reader a hint of what to expect inside.

3 I used Photoshop, Photoshop help me edit and crop images to make them more hard and Urban. Photoshop allows me to be creative and play around with the image. With Photoshop you can go in detail with each image you upload and edit each lilttle pixel in the image. You can crop out the background and put a different background the one you choose or a photo. The reason why I like photoshop is because it allows me to be much more creative with photos and make me for fill my creativity. Photoshop gives you ability to manipulate with photos and portrays what you want out of a photos by adding layers and effects to the photos so you can give a theme to it. The down side working with Photoshop is that it is very hard to get use and things might go wrong like layers might not meet or things you didn't know about. Photoshop does not correct you mistakes so you must find a solution to fix the problem on your own must of the time. The PC you are working can tend to freeze most of the time and when it does Photoshop does not auto save this can be a problem for people that have errors with there PC.

4 How does you Media product represent particular social groups I presented teenagers as young and urban people, trouble makers and wild. I did this by using urban and hard looking images and poses with a black brick wall as a background. My magazine is for teenagers because of the image and the content of the magazine. I resented teenagers by putting an image of my self as a urban street Hip Hop teenager. This is a type of stereotype. I used this stereotype because this is the only representation of teenagers. My magazine tries to bring the music side of the troubled youth instead of the street. My magazine brings all theses elements by music and inteviwes talking to the teenagers and hearing there music showing there point of viwe in written and music for. I believe that my music magazine brings that across. My music magainze is called S.W.A.T meaning Serious With Audio Technology. This shows that the youth are very interested with music and know how to portray music with there feeling and what's going on with there life.

5 Marketing for your product My magazine is on Hip Hop, RnB,Grime, Indie Rock and Dancehall theses are all mainstream music so this can be distributed in most shops and book store’s. My magazine also can be published on the internet, this will make publish my own website for the magazine. My magazine is read by millions of people not because of the magazine because of the music that is being portrayed and the content like talking to artists in the industry. The pricing of the magazine should be around 3 to 5 pound depending on the content. The magazine should not be to expensive this might put of the customer when looking for magazines. The magazine should be in a package so it looks presentable and some issue should come with a gift of a offers inside for stores.

6 What type of audience will read your The age group that would read my magazine is between 17 to 30 years. People that are into urban type of music will be into my magazine. The reason why people the age of 30’s will like this magazine is because there is a section of old school Hip Hop. My magazine also has a section for grime this type of music is manly for young people the youth of today. The other section is dancehall this mainly attracts people the from the up to the age of there late 20’s. This is because of the rave culture going on with dancehall music. Dancehall is very big in clubs and raves so people the ages of 18 and above will like very much. RnB is for all age groups because of the content in the songs. My magazine has sections for different ages groups. The stories also have different meaning. I used the brick wall for a back ground so that it gives the street feel to the magazine so this can attract the reader. The colours I choose to use is black and white mainly to give a rough and urban look to the magazine. My magazine masthead show that it the magaazine knows about music S.W.A.T meaning Serious With Audio Technology.

7 What have you learnt from the both tasks given you From the first task I have learnt how to use Photoshop and how to edit photos and to be creative when using Photoshop. I have also learnt different elements of photography like the rule of thirds to give my photo more powerful meaning. I have learnt newsletter conventions how to make my magazine look professional.

Download ppt "Evaluation AS Media. How does your Media product use conventions On my music magazine I chose to not follow the normal conventions that are used in published." 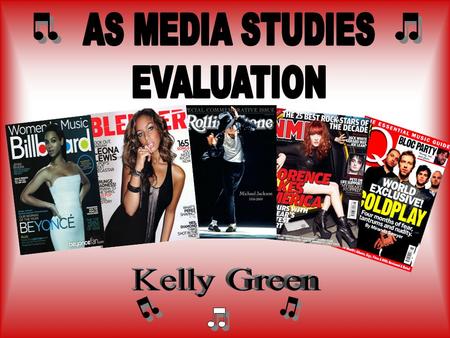 In what ways does your media product use, develop or challenge forms of conventions of media products For my music magazine “Tempo” I have tried to use.