Presentation on theme: "Jack Tunstall. The Task: The task we were given was to create a front cover, contents page and double page spread for a music magazine. We also had to."— Presentation transcript:

2 The Task: The task we were given was to create a front cover, contents page and double page spread for a music magazine. We also had to use a blog to document our work and show how we progressed through the making of the magazine.

4 Research into existing magazines To help me finalise my ideas of what I was going to do I looked at 3 different magazine covers, 3 double page spreads and 2 contents pages, from: Q, Kerrang and NME magazines.

5 Research into existing magazines (continued) My research helped me finalise my ideas to what I wanted the magazine to look like. All three magazines used similar forms & conventions such as: a dominating image that is the “centrepiece” of the front cover, they also used words like: Win, Panic and Special, which are used to try and callout to their audience. All three also used smaller articles on the cover to show what else the magazine contains without distracting the reader from the centrepiece image. For the contents pages 2/3 were on single page with Q having a double-page contents page. All three used different colour/sized fonts to separate article title and info which I found effective to separate when reading fast. They also contained one vocal image (usually relating to centrepiece of front cover). The double page spreads varied on how many pictures they contained and how they were set out, but all three did structure the text in paragraphs with clear headings

6 Provisional Ideas Genre: My provisional idea for the genre of the magazine was to be “general music”, in other words one what would cover the main genres of music in todays charts. I chose this genre as I believe it would widen the audience. Another reason for choosing this genre is that I like the majority of music genres but don’t have a pacific interest in a single genre. One final reason for selecting this genre was that, out of the 10 people I asked “What genre should my Magazine be?”, 40% replied that a general music Genre should be used. (the highest of the options)

7 Audience Audience: My first idea for what the audience would be was that they would be: 14 years + I chose this age as I agree that children under the age of 14 do like music and would buy the magazine but I have set this age as I think that if you are under 14 you may not have the money to buy a magazine (by yourself), but at 14 I believe you would. Cross-Section of Social Class In my opinion your social class would not effect whether or not you would go and buy a music magazine, but I do admit as my magazine is priced at £2.50, it may be too costly for some, but on the whole I do believe that the majority of people would not find it too costly.

8 Audience (continued) “Attracting” or “Calling-Out” to the audience I believe that many features of my magazine would attract my audience in several ways: I feel that because it is a general music magazine and therefore would contain some different genres within it, I think the audience would be attracted as they will be able to look at their favourite music while maybe looking at another genre they don’t listen to and may find they really like it, which then would be a “hook” if this happened. Also I believe because that there aren’t many magazines which do not contain a cross- section of music in their magazines (to my knowledge and research), it is something different which may attract some readers, who are infested in many genres and they will only have to buy one magazine instead of 3 or 4. This would also be cost effective for them, which could also attract some people into buying the magazine.

9 Audience (continued 2) Other ways of attracting the audience: Using Competitions as “callouts” to persuade possible reader/audience into buying magazine The Price must suggest that the magazine is of a high standard but yet must be equally affordable (to enhance the idea of that my magazine is targeted at a cross-section of social classes) Subscriptions This may attract a audience (this would be a secondary audience), that wouldn’t pick it up in the shop but would happily buy it if they could subscribe and have it delivered to their door.

10 Forms & Conventions(Cover) Free gift to attract audience The word “Win” used to attract audience Top 20 used to represent the general music genre The word “ Special” used to attract or callout to the audience “12 year old” to show the youthfulness of the magazine Chart Poppers used to portray the general music genre and font used to connote the genre as well – tile also connotes the way music has changed and gives its’ brand identity Price: affordable to cross-section of social classes

12 Forms & Conventions (Article) Quote taking from article hooks audience into reading the article to find out the artist feels that way Two separate columns to make it easy to read for the audience, and also gives a simplistic look, which may connote the simplistic lifestyle of the artist it is about Questions and answers clearly separated by bold and normal font Picture goes over both pages to connote the importance of this artist – also makes it oblivious to the reader the article is about him

13 Institutions If my magazine were to be published and sold I believe it may be done in conjunction with the online music magazine “themusicmagazine.co.uk”.,as this online magazine has a very similar genre to my magazine. I think that this could widen the audience as it could then take an online format as well which will up the secondary target audience.

14 Representations Representations: Megz-T representing the young and vibrant aspect of music today. The Dark/gloomy lighting represents/connotes the spectacle Megz-t might or might not be The fact she is smiling and looks happy connotes she is excited about her possible rise to fame

15 Audience feedback When asked if what they thought of my magazine was good, OK, or not good they replied: They said that the best part of the magazine was the article as they believed it looked the most structured. The did like the Front cover but believed that the lighting could be tweaked. They said they like the contents as it was informative of what is in the magazine and it is got lots of information in it, they also believe all the photos in the magazine were appropriate and they also said they liked the font used.

16 Technology Skills Before I started this course, I had not blogged before, but had used other ways of expressing opinion, e.g. on social networking sites like Facebook. I did find wordpress easy to use and might even use it to create my own blog.

17 Technology Skills (continued) Photography : I learnt about different camera angles and how to take them. A tripod I very helpful, for increasing accuracy and reducing blur in a photo. Finally, I learnt how to frame a photo properly

18 Technology Skills (continued 2) Photoshop I had used Photoshop before but I did learn a lot of new skills during the making of my front cover, such as: How to resize an image correctly Photoshop won’t make a bad photo look fantastic How to give a more quality look with the lasso tool

20 Developments Development from my preliminary task to my music magazine task:

21 Conclusion AS you can see, my skills have developed since the preliminary task, and I feel more confident in both Photoshop and InDesign now. Overall I have enjoyed making my music magazine even though I had to re-take pictures again, but despite this I am still happy with what I have produced

Download ppt "Jack Tunstall. The Task: The task we were given was to create a front cover, contents page and double page spread for a music magazine. We also had to." 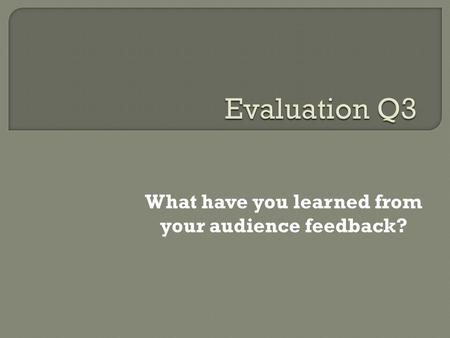 What have you learned from your audience feedback?