1 Discrimination and Segregation Against African Americans

6 Intimidation and crimes were often directed against African Americans (KKK, etc) The laws were enforced by both local police and mob violence that sometimes led to the lynching of blacks

7 African Americans looked to the courts to protect their rights and enforce the Civil Rights Amendments (13 th, 14 th & 15 th ).

11 But, in Plessy v. Ferguson, the Supreme Court ruled “ separate but equal ” did not violate the 14 th Amendment The Jim Crow laws stayed in effect

13 With the lure of jobs and promises from the North, many African Americans left the South and settled in Northern cities like Chicago, Cleveland and Detroit But they still experienced racial discrimination

16 Ida B. Wells Led an anti-lynching crusade and called on the federal government to take action! Between 1882 and 1930 almost 5,000 people were lynched in the U.S. Most lynching were against blacks in the south, though some were white or Asian She spoke out and wrote against this injustice

17 Booker T. Washington Believed the way to equality was through vocational education and economic success. He accepted social separation. Believed in industrial education for blacks and provided it at his Tuskegee Institute. Felt that blacks could achieve good lives if they were properly prepared for the industrial jobs in demand. A man “ of his times ”

18 Getting educated at Tuskegee Institute

19 W.E.B. Du Bois Believed that education was meaningless without equality. Supported political equality for African Americans by helping to form the National Association of Advancement for Colored People Disagreed with Washington ’ s plan of blacks settling for low class industrial jobs Didn ’ t think blacks would achieve their potential or compete with whites with only factory jobs. Was a “ man ahead of his times ”

20 Du Bois supported his desire for political equality for African Americans by helping to form the National Association for the Advancement of Colored People (NAACP). 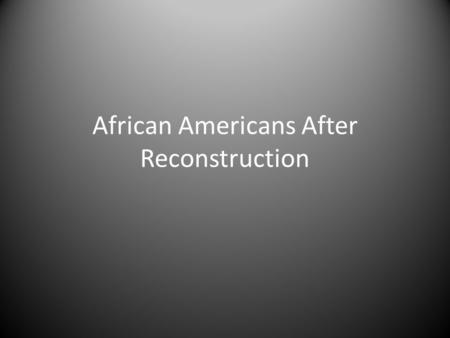 African Americans After Reconstruction Frederick Douglass, 1866 The arm of the Federal government is long, but it is far too short to protect the rights.