Presentation on theme: "LITERARY ELEMENTS ENGLISH 12. PLOT  Describes the structure of the story. It shows the arrangement of events and actions within a story."— Presentation transcript:

2 PLOT  Describes the structure of the story. It shows the arrangement of events and actions within a story.

3 EXPOSITION  The start of the story, the situation before the action occurs.

4 RISING ACTION  The series of conflict and crisis in the story that lead to the climax.

5 CLIMAX  The turning point, the most intense moment.

6 FALLING ACTION  All of the action which follows the climax.

7 RESOLUTION  The conclusion, the tying up of all loose ends.

8 CONFLICT  The dramatic struggle between two forces in a story. Without conflict, there is no plot!

11 SETTING  The time and place in which the story takes place.

12 POINT OF VIEW  The point of view from which the story is told.  Types: Omniscient Limited Omniscient First Person

13 THEME  The central idea of the story.

14 SYMBOLISM  A symbol represents an idea, quality, or concept larger than itself.

15 CHARACTERIZATION  The method used by a writer to develop a character.  Types of characterization: Direct Indirect

17 FORESHADOWING  Early clues about what will happen in a later piece of fiction.

18 IRONY  A difference between what is expected and reality.

19 FLASHBACK  Starts in present day and goes back to the past.

20 TONE  The author’s attitude toward a subject.

21 MOOD  The climate of feeling in the story.

23 METAPHOR  Comparison is not announced with like or as.

25 PERSONIFICATION  Giving the qualities of a person to an object, animal, or idea.

Download ppt "LITERARY ELEMENTS ENGLISH 12. PLOT  Describes the structure of the story. It shows the arrangement of events and actions within a story." 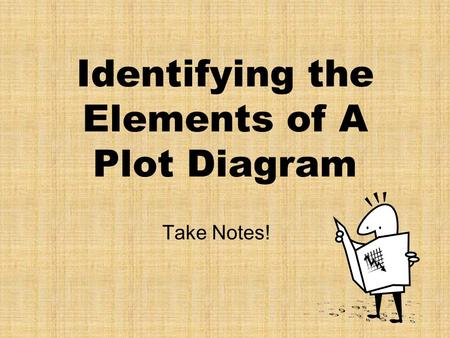 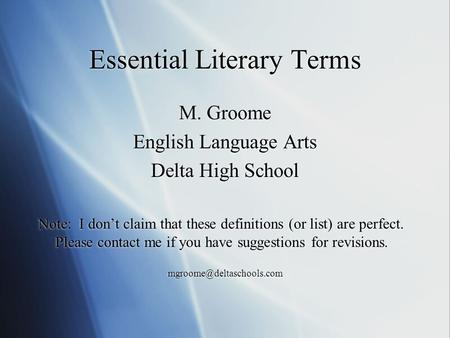