6 Factory System Slide 3 The factory system had many workers under one roof working at machines. Many people left farms and moved to the city to work in factories. They wanted the money that factories paid. This change was not always for the better.

7 Factories Come to New England Slide 4
New England was a good place to have a factory. Factories needed water power, and New England had many fast-moving rivers. Also, soil in New England was not suitable for large scale farming so entrepreneurs looked for new ways to make money

9 The Lowell Mills Hire Women Slide 5
In 1813, Francis Cabot Lowell built a factory in eastern Massachusetts, near the Concord River. The factory spun cotton into yarn and wove the cotton into cloth. Something was different about this factory, they hired women. The “Lowell girls” lived in company-owned boardinghouses. The girls worked over 12 hours a day in deafening noise.

10 The Lowell Girls Slide 6 Young women came to Lowell in spite of the noise. They came for the good wages: between two and four dollars a week. The girls usually only worked for a few years until they married.

11 Less Dependency on Europe
Slide 7 * As a result, the U.S. no longer had to rely on buying finished textile products from Europe! View the inside of a 19th century textile mill. (Lowell, MA ) 1845 Lowell factory pamphlet

13 Factory Workers Slide 9 Women were paid half as much as men.
Working hours were long, and wages were low. Ex.) hour work days Earnings: men - $5 per week women - $2 per week children - $1 per week Cities developed as farmers and immigrants took available factory jobs.

14 Canals Man made waterways were constructed all over the Northeast to get goods to west and east. One canal that was built between the years was the Erie Canal.

15 New York and Canals Slide 10
The Erie Canal ("Clinton's Big Ditch") opened on October 26, 1825, 363 miles long, forty feet wide, four feet deep, 18 aqueducts and 83 locks, shortened travel time form the east coast to the gateway to the west (the Great Lakes) by half and reduced shipping costs by 90%. only trade route west of the Appalachians, prompted the first great westward migration of American settlers, turned Rochester into the nation's first boom town and made New York City the busiest port in the United States.

16 Steamboat Slide 11 Robert Fulton designed a steam engine for a steamboat that could move against the current of a river or against the wind. His ship the Clermont sailed from New York City to Albany and back in 62 hours. A record at that time. The steamboat created more opportunities for trade and transportation on rivers.

17 The Telegraph Slide 12 The telegraph was invented by Samuel Morse.
This machine sent long and short pulses of electricity along a wire. With the telegraph, it took only seconds to communicate with another city. The invention of the steamboat and telegraph brought the people of the nation closer to each other.

18 John Deere and the plow Slide 13
In 1836, John Deere invented a lightweight plow with a steel cutting edge. Deere’s plow made preparing the ground for planting much less work.

19 Cyrus McCormick and the Reaper Slide 14
Cyrus McCormick invented a mechanical reaper, cut grain from the fields. This allowed farmers to plant much more seed because they could harvest it easier. 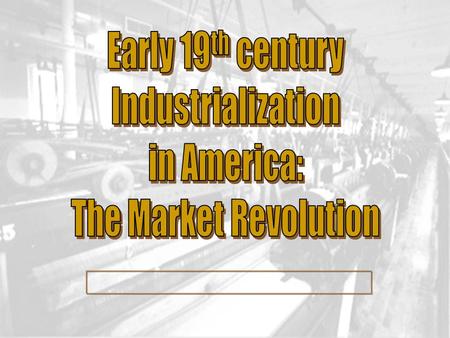