THE COLD WAR. The Iron Curtain  Eastern Europe is the first area where the communist/capitalist conflict arose  The creation of satellite nations forced.

Presentation on theme: "THE COLD WAR. The Iron Curtain  Eastern Europe is the first area where the communist/capitalist conflict arose  The creation of satellite nations forced."— Presentation transcript:

9 Berlin Blockade and Berlin Airlift (1948)  The Soviets want all of Berlin (since it is in their zone) so they blockaded the western portion  They did this hoping to make the Allies give up this section  In response, supplies, food, medicine, etc were sent in by air for over 11 months  In 1949 Stalin lifts the blockade

13 NATO vs. Warsaw Pact  North Atlantic Treaty Organization (NATO) developed in 1949  It is designed as a military alliance to defend US, Western Europe and Canada from outside attack  In response, communist nations develop the Warsaw Pact

18 Sputnik, ICBM and a Space Race  The Soviets launch Sputnik I, world’s first space satellite  Both USSR and US test Intercontinental Ballistic Missiles (ICBM) which are long range rockets  The need to be one step ahead of the other country with space technology development is known as the space race

21 Soured Relations Lead to Problems in Cuba  Relations are good for a while between US and USSR until the USSR shoots down a US spy plane  USSR denounces US and America retaliates by cutting off trade w/ Cuba, as they are harboring Soviet nuclear missiles  Cuba turns to USSR for help  Cuba already communist due to Castro coming to power in 1959

22 Bay of Pigs 1961  The US decides to get Castro out of power by taking Cuban exiles in America, having the CIA train them, put them back in Cuba, have them start a revolt and overthrow Castro  This was a HUGE failure and an embarrassment to JFK

23 Cuban Missile Crisis 1962  Since the US found Soviet missiles pointed at America in Cuba they needed to act  The Soviets put their missiles in Cuba to offset US missiles in Turkey pointed at the USSR  In response, the US blockaded Cuba and Khrushchev agreed to remove missiles if the US did not invade Cuba

24 Results of Cuban Missile Crisis  This crisis is one of the most important events of Cold War…Why????  Each side knew better relations were key and set up a “hotline” so they could talk before missiles were launched  The US removes its missiles from Turkey  Leads to policy of détente, or relaxing of tensions between US and USSR

25 SALT  SALT: Strategic Arms Limitation Talks  Nixon was the first to meet with the Soviets and they basically agreed to limit their nuclear weapons  This also is an example of détente or the beginning of the end of the Cold War

26 Soviet Satellite Nations  The USSR kept a close guard on its satellite nations  The people resented this, though could not do much against the powerful Soviet forces  Some countries include:  Poland  Czechoslovakia  Hungary  East Germany and East Berlin (city)

27 IRAN HOSTAGE CRISIS  The US tried to keep the Shah of Iran in power as he wanted to westernize Iran and also wished to get rid of religious influence in the government  Another political group had the support of the people, who wished to see religion remain in government  This group used their power to take over Iran and wanted the Shah to be tried for treason  The Shah (supported by the US) would not return from exile.

28 IRAN HOSTAGE CRISIS CONT’D  In 1979, a group of militants stormed the US embassy and held hostage all of the embassy workers for almost two years with the permission of the new Iranian gov’t  They demanded return of the Shah for trial in exchange for the hostages, but the US would not comply  The hostages were eventually let go (1981), but the relationship between Iran and US remains strained even today

29 Berlin Wall  Many people had begun to migrate over to West Berlin in search for better jobs, economy, or to get away from communism  This was an embarrassment to the Soviet Union so they began to build a massive wall  This wall was to keep westerners out and easterners in  People faced dogs, electric wire, etc trying to get across  It was the most visible and powerful symbol representing the iron curtain

32 Fall of Berlin Wall  In November 1989 the government of East Berlin announced that crossing the border (wall) would be permitted  In the next few weeks that followed, the wall was dismantled  German unification (east and west united) was finally completed on October 3, 1990

34 Tiananmen Square  Series of demonstrations led by students in China in the summer of 1989  These students were protesting the communist government  The military cracked down on the protesters, leaving many dead and wounded  The violence the protesters met was broadcasted around the world and angered many democratic nations 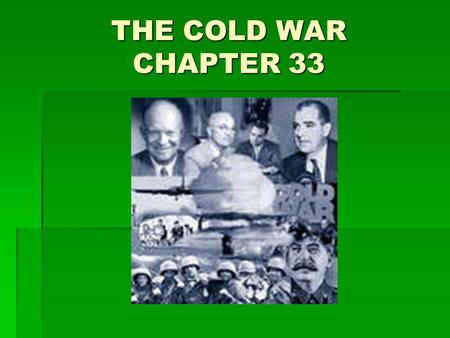