3 Why do people immigrate?

4 Two reasons why people immigrated are: 1.Push factor: A factor or condition in a region that encourages people to leave their current location – migration. For example: The closing of the steal plant and coal mines in Cape Breton 2.Pull factor: Factors that attract people to a new location. For example: Fort McMurray (McMoney) http://yaleglobal.yale.edu/display.image?id=2204http://fortress.uccb.ns.ca/historic/pier13b.gifhttp://www.econbrowser.com/archives/2005/12/syncrude_plant.jpg

7 What type of identity does Canada want to be perceived globally? Canada wants the world to be perceived as a country that is based on: - Peace - Justice - Human Rights - Multiculturalism (supporting many cultures) Portraying the above perception why do you think people would want to immigrate to Canada?

8 What does prejudice mean? Prejudice means the belief that not all people have equal value. What does discrimination mean? Discrimination is the unfair treatment, because government policies were based on race, language, religion or culture.

9 Discussion question How has prejudice and discrimination demonstrate an understanding of the nature of migration to Canada?

10 How has immigration to Canada change from 1920 to the present? http://www.cifacanada.org/images/map-faces175.jpg

12 Understanding the nature of immigration before 1945 Immigration peaked before WWI Relocation of First Nations open fertile soil for European farmers Government offered free land Government did an advertising campaign targeting Great Britain, US and Eastern Europe Moved into cities to be employed in factories, railways or miners http://www.virtualmuseum.ca/Exhibitions/Pier21/index_e.html

14 What happens when there is not enough jobs to support the number of people living in an area? People would struggle to make a living People could not afford the cost of living because they did not have a job. What attitude did Canadians have during the struggling time of the depression on immigration or immigrants?

15 What changed Canadians attitude toward immigrates after 1945? The war made Canadians more sensitive to immigrates. Canada became more welcoming of immigrants because it need more workers for the post-war boom. 1947 Canada took in immigrants for humanitarian reasons instead of employment reasons.

17 What is a humanitarian? A humanitarian is a person committed to improve the life or lives of other people What is humanism? Humanism is a system based on the values, characteristics and behavior that are believed to be best interest for human begins. It is a concern with the needs, well-being and interests of people.

18 Immigrants were divided into three classes upon entering into Canada. 1.Family class: Canadian relative sponsors the immigrant. 2.Humanitarian or refugee class: Immigrant in great personal danger. 3.Independent class: Applicant proves to the Canadian government their move to Canada is in the best interest for Canada.

19 Debate over Immigration and Refugees Immigrates and Refugees is a well debated topic in Canada. The debate brings up two points: 1.Immigrants strengthens Canada as a population. 2.Immigrants lead to social problems and high unemployment.

20 How many immigrants should Canada accept? Examine the conflicting viewpoints on page 66. Pick one viewpoint and write a two page double spaced argument why you stand behind your chosen viewpoint. You will have to do some research to help back up your answer. You will use the internet or library to help you back up your viewpoint. Make sure your argument makes sense. You will be asked to share your viewpoint in class.

21 People Smugglers Chinese people put their live in the hands of people smugglers to reach Canada by boat as refugees. Should Canada accept these refugees or send them back to China to make legal applications to enter Canada? Write a one page double space point of view. Think about your answer, think about your reasons and then give an acceptable explanation why your viewpoint is correct. Make sure you critically think through your answer.

22 Migration within Canada Facts: -Canadians move to the same provinces and cities as immigrants -The movement is for economic factors -1870 - 1920 migrated to the New England area -Great Depression made Maritimers feel they had to leave to find work -20th Century Atlantic Canadians moved to Ontario, Alberta and British Columbia -First Nation people can move freely between the US and Canada (Jay Treaty) 1794 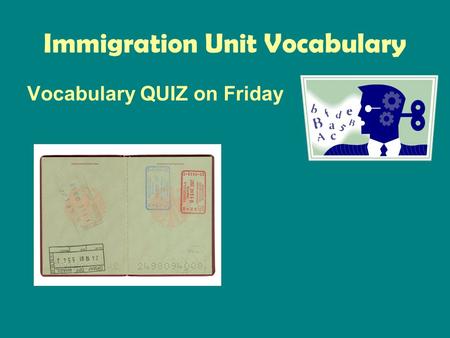 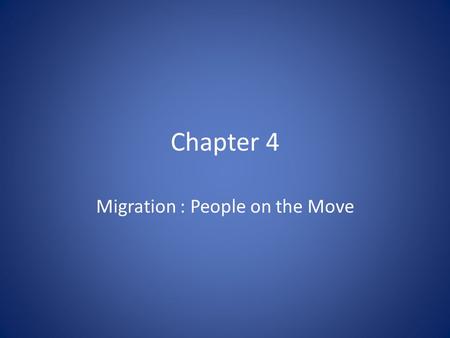 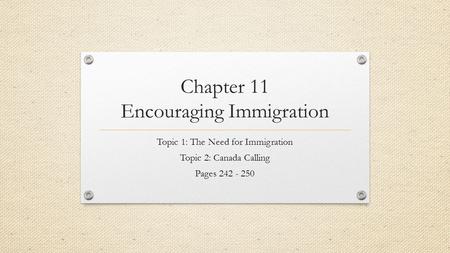 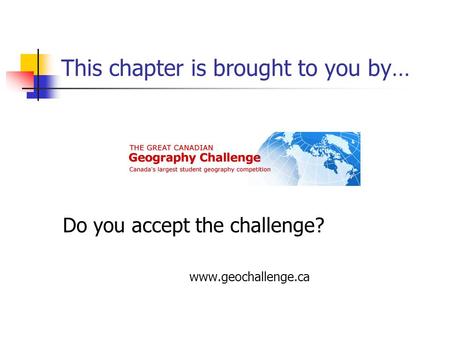 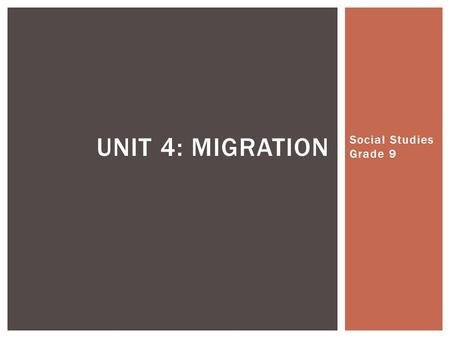 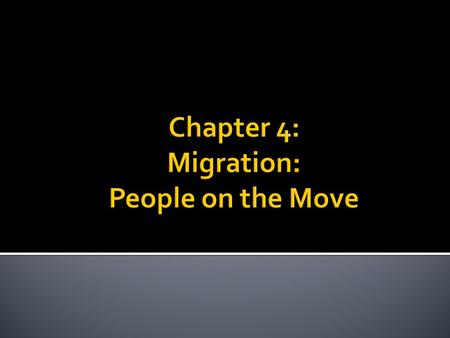