4 II. BASIC RULES When changing from quoted speech to reported speech, several changes occur.  In all sentences, the quotation marks and the comma immediately before the first quotation mark are removed.  Next, the word "that" is usually inserted after the reporting verb (say, ask, told, etc.)  Then, the subject pronoun is changed so that the meaning of the quote is not changed.  Lastly, the tense of the verb is changed, or shifted.  She said, "I'm teaching English online." She said she was teaching English online.

10 2. Time and place changes ›
Time and place references often have to change: If the reported sentence contains an expression of time, you must change it to fit in with the time of reporting. now › then today that day here there this that this week that week tomorrow the following day the next day the day after

12 Examples: I went to the theatre last night. He said he had gone to the theatre the night before. I'm staying here until next week. He said he was staying there until the following week. In addition if you report something that someone said in a different place to where you heard it, you must change the place (here) to the place (there). Example: At work At home "How long have you worked here?" She asked me how long I'd worked there.

13 3. Pronoun changes In reported speech, the pronoun often changes.
For example: Me You "I teach English online." She said she teaches English online. You also need to be careful with personal pronouns. They need to be changed according to the situation. You need to know the context. For example, there is possible confusion when you try to change reported speech to direct speech: She said she'd been waiting for hours (Is she one person or two different people?) I told them they would have to ask permission (Are we talking about two groups of people or only one?)

14 4. Reporting Verbs Said, told and asked are the most common verbs used in indirect speech. We use “asked” to report questions: I asked Lynne what time the lesson started. We use “told” with an object. Lynne told me she felt tired. We usually use “said” without an object. Lynne said she was going to teach online. If “said” is used with an object we must include “to” Lynne said to me that she'd never been to China.

21 THE END KOOL!!! THANKS FOR LISTENING 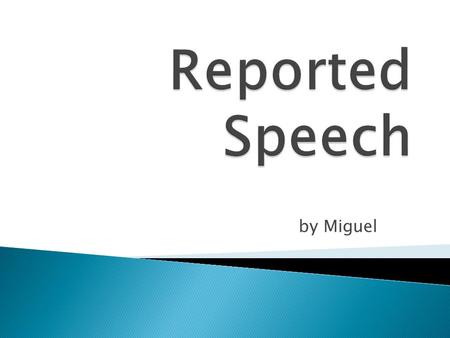 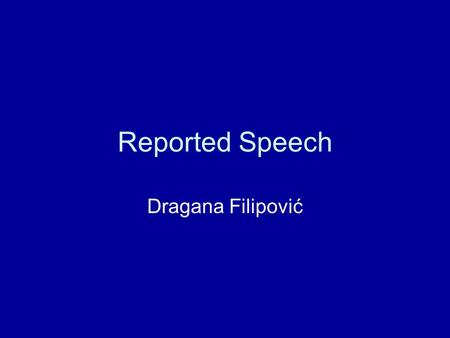