3 Dependent Clauses A dependent clause is a group of words that contains a subject and verb but does not express a complete thought because it has a subordinate conjunction or relative pronoun. The clause might begin with something like “when.” When Jim studied at Tim Hortons for his chemistry quiz (What happened when he studied? The thought is incomplete.)

10 Simple sentence Simple sentences are composed of ONE INDEPENDENT CLAUSE and the PHRASES necessary to the idea expressed I like chocolate. Eileen ran to school. In the heat of the night, Ms Doucet got up for a drink of water.

11 Compound sentences Compound sentences are sentences that have TWO INDEPENDENT CLAUSES and their associated PHRASES joined by a COORDINATING CONJUNCTION. Coordinating conjunctions include: for, and, nor, but, or, yet, so (acronym – FANBOYS) I love chocolate yet I hate chocolate-covered almonds. Mr. Zohar rides his bike to school and Mr. McNaughton drives.

12 Complex Sentences Complex sentences include ONE INDEPENDENT CLAUSE and ONE DEPENDENT CLAUSE and their associated phrases. If you come over early, we can have lunch first. When my grandmother baked gingerbread cookies for us to take home, my sister and I used to throw them out of the car window on the 401.

13 Complex-compound sentences
Just as the name implies, a complex-compound sentence is the combination of ONE DEPENDENT CLAUSE with a COMPOUND SENTENCE (two INDEPENDENT CLAUSES joined by a COORDINATING CONJUNCTION) and their associated PHRASES. This is the longest type of sentence that can be formed in English. Adding more clauses will result in sentence errors. When I go to Montreal, I visit my family and I go to Schwartz’s for a smoked meat sandwich.

16 Run-on sentences A run-on sentence is one in which two or more independent clauses are joined inappropriately. The term “Run-on Sentence” includes both comma splices and fused sentences. Often this term is used more specifically for sentences that have three or more independent clauses joined by conjunctions. E.g. “I like ice cream so I went to the store to buy some, but the store didn’t have any left, so I had had to take the bus to the mall to get some, and then I was late for work.” FIX: I like ice cream and went to the store to get some; however, the store was out of chocolate ice cream, so I had to go to the mall. After all the running around I did, I was late for work.”

19 Can you spot the error(s)?
Ms Doucet’s class is the best, I always learn something from her. ERROR: Comma Splice

20 Can you spot the error(s)?
Eileen is tall enough to reach the top shelf I don’t think you are. ERROR: Fused Sentence

21 Can you spot the error(s)?
A long time ago in a country far, far away. ERROR: Sentence Fragment

22 Can you spot the error(s)?
Although I wanted to come to the party, I could not make it, I had to go to my grandmother’s house. ERROR: Comma Splice

23 Can you spot the error(s)?
The dog ate my homework and my little sister flushed my cell phone down the toilet and my bus pass disappeared, I was having a bad day. ERRORS: Run-on Sentence and Comma Splice 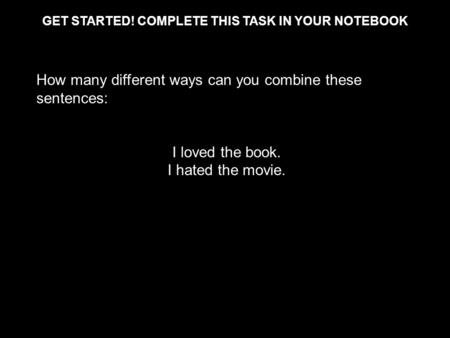 GET STARTED! COMPLETE THIS TASK in your notebook 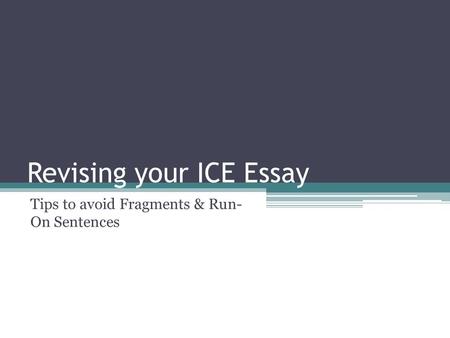