2 Parts of a computer

3 Tower The container for the CPU, memory, motherboard, video graphic card and drives.

6 Storage Devices These devices are used for storing digital information.

7 Floppy Disk A flexible magnetic disk, sealed in a 3 ½ inch hard plastic casing, that has a maximum storage capacity of 1.4 megabytes. WARNING: Heat, water, and magnetic fields will damage the contents of a floppy disk.

9 Compact Disk- Recordable Disk CD-R A compact disk on which a computer can write data. Data written to a CD-R disc cannot be overwritten. Only CD that can record and play music.

10 Compact disc-read/write CD-RW A disk on which a computer can store, erase and replace of data.

11 Digital Video Disk-Random Access Memory DVD-R A DVD that allows users to record, erase, and re-record large amounts of data. They can only be used in a DVD-R drive.

13 Flash Drive High-speed USB 2.0 interface for fast data transfer. They can hold 215 megabytes and up to 1 Terabyte.

14 Output Devices These devices are used to display your work.

17 Input Devices These devices are used to enter information into a computer.

18 Mouse A computer input device for selecting options by pointing to and clicking items on a display screen.

19 Keyboard An input device for entering text or numbers into a computer.

20 Scanner Used to convert any printed picture or document to a digital file that can be uploaded to a computer.

21 Digital Camera A camera capable of taking photos and uploading them directly to the computer.

22 Graphics Tablet A device used to create sketches and drawings in digital format for display on a computer screen.

23 Memory Read-Only Memory or ROM Like the CPU, memory is part of the motherboard, but it comprises many chips instead of just one. The first kind of memory is read-only memory, or ROM, which can never be altered. ROM is like an animals instinct; your computer was born with this memory. It is hard-wired memory, it contains portions of the system software.

24 Memory continued Random-Access Memory or RAM The second kind of memory is random-access memory, or RAM, which you can alter. When you open a program, the CPU copies it to RAM in order to access it more quickly. When you quit the program, the CPU deletes it from RAM. When you restart or turn off your machine, all data stored in RAM is lost. So RAM data is entirely temporary. 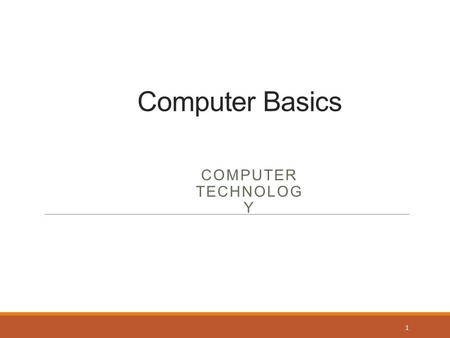 Computer Basics COMPUTER TECHNOLOG Y 1. What Is a Computer? An electronic device Accepts data and instructions Manipulates, processes, and displays the.