2 Note to the student Please make brief notes on the following computer hardware + software components After each section research the current standards of performance + price. Get the best of everything

4 What makes up a computer? Hardware Hardware consists of the parts you can actually touch, hold and move (with care). This includes the central processing unit (CPU), monitor, keyboard and a mouse or pointing device. Other pieces of hardware that can be attached to a computer are called peripheral devices—these include printers, disk drives, scanners, digital cameras, compact disc (CD) drives and digital video (DVD) drives.

7 Random access memory (RAM) Computer memory refers to the internal part of the computer used to store instructions and data. When an application is run, instructions are loaded into random access memory (RAM). Each application requires some of the RAM to work effectively. The amount of memory is measured in kilobytes (KB) and megabytes (MB). One MB is equal to 1024 KB. A typical personal computer has a minimum of 256 MB of RAM.

9 Monitor A computer monitor is the screen the computer uses to display input and output. Colour monitors display a minimum of 256 colours, although some display several million. Flat screen monitors use less desk space and are easier to read than CRT monitors.

10 A keyboard is the most common device used for entering data. Most computers have a standard ‘QWERTY’ keyboard that has its origins in the typewriter. ‘QWERTY’ refers to the six characters on the top left-hand side of the keyboard. When a key is pressed, it is translated into an instruction the computer can understand. A mouse is a pointing device used to control the cursor and to help move around a computer screen. It can be used to carry out commands by pointing and clicking the mouse buttons. The standard Windows mouse has two buttons. Many models also have a wheel. A mouse can be connected to a computer using a cable, usually USB. They can also be connected wirelessly using: Infrared Bluetooth. 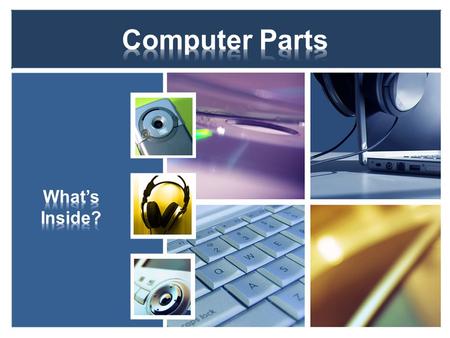