4 Gravity—A Noncontact Force
Gravity is an attractive force that exists between all objects that have mass. The size of a gravitational force depends on the masses of the objects and the distance between them. Lesson 3-2

5 Gravity—A Noncontact Force (cont.)
If the mass of an object increases, the gravitational force increases between it and another object. Lesson 3-2

7 Gravity—A Noncontact Force (cont.)
Weight is a measure of the gravitational force acting on an object’s mass. The weights of objects on the Moon are smaller than objects on Earth because the mass of the Moon is smaller. Lesson 3-2

8 Friction—A Contact Force
Friction is a contact force that resists the sliding motion of two surfaces that are touching. Lesson 3-3

9 Friction—A Contact Force (cont.)
The force of friction acts in the opposite direction of an object’s motion. The heavier an object, the more it is affected by friction than a lighter one. Air resistance is the frictional force between air and objects moving through it. Lesson 3-3

13 Balanced Forces and Constant Motion
When balanced forces act on an object, the motion is constant. The object is either at rest or moving at a constant velocity. Lesson 3-6

14 Forces and Newton’s Laws of Motion
According to Newton’s first law of motion, if the net force acting on an object is zero, the motion of the object does not change. Inertia is the tendency of an object to resist a change in its motion. Lesson 3-6

15 Forces and Newton’s Laws of Motion (cont.)
According to Newton’s second law of motion, the acceleration of an object is equal to the net force exerted on the object divided by the object’s mass. Lesson 3-6

16 Forces and Newton’s Laws of Motion (cont.)
The greater the mass, the greater the force needed to accelerate the object at the same rate. Lesson 3-6 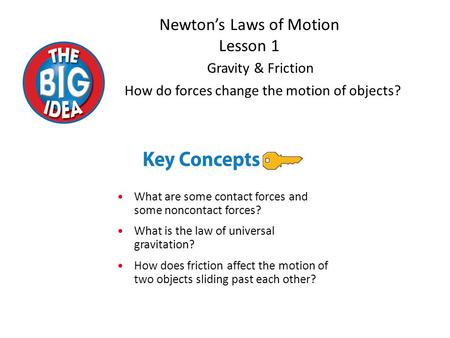 How do forces change the motion of objects? What are some contact forces and some noncontact forces? What is the law of universal gravitation? How does. 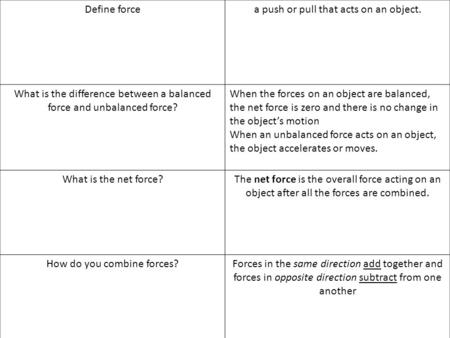