1 Early Middle Ages 500-1000 CE. Medieval Period The first 500 years known as Early Middle Ages or the Dark Ages Dark---Levels of learning and culture not as great as they had been during the Greek and Roman Times Instability of government

5 Charlemagne Pope crowned Charlemagne the Frankish king and gave him the title emperor of the Romans Charlemagne instituted reforms, education, arts etc. Gave large estates to nobles who had served him in the army or government. This is a factor that leads to the rise in Feudalism.

6 Vikings Fierce fighters and sailors from Scandinavia Attack western Europe periodically Attack settlements on the coasts of England, Ireland, Scotland and the Frankish kingdom Most Vikings were farmers, not invaders Eventually they set up the independent kingdoms of Scandinavia.

11 Feudalism Europe’s economic, political and social system, based on the concept of protection King grants a large piece of land (fief) to an individual noble (lord) in return for political and military support Nobles who received the land would grant smaller pieces of land to lesser lords in return for loyalty and protection

12 Feudalism Most vassals were knights. Trained soldiers who had swore allegiance to a greater lord and were obligated to defend him. Knights followed the code of chivalry Common people—artisans and peasants performed economic functions for the lord in return for his protection. 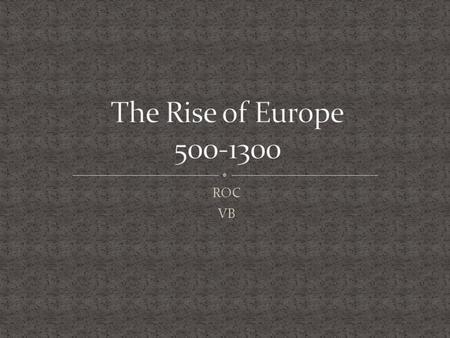