3 The Early Middle Ages After the fall of Rome, came a period called the Middle Ages, or Medieval times It is a fitting name for the period that lies between ancient and modern times Geography influenced where medieval Europeans settled and what they did The Franks, Angles, and Saxons of Western Europe built new societies and defended them against Muslims, Magyars, and Vikings The Catholic Church spread Christianity through Western Europe

4 Feudalism The Vikings, and other groups of barbarians, spread fear and destruction throughout Europe During the Middle Ages, people looked to nobles to protect them Feudalism developed in Europe in the Middle Ages Feudalism was based on landowning, loyalty and the power of armored knights on horseback Knights followed a code of chivalry and lived in castles, while peasants lived in simple houses and worked hard all year long Increased trade led to growth of towns and cities and the rise of guilds and city governments

5 Feudalism A political, economic, and social system based on loyalty and military service

8 Parts of a Medieval Castle

10 Life on the Medieval Manor
Serfs at work

13 Kingdoms and Crusades England developed a system in which the king’s power was limited by Parliament French kings called the Capetians conquered lands held by the English in western France and set up France’s first parliament After Mongols destoyed the Kievan state, the rulers of Moscow built a new Russian state Crusaders from Europe captured Jerusalem but were later driven out by the Muslims

14 The Church and Society Kings and popes had a powerful effect on the lives of medieval people, as did religion Religion helped to shape the culture of Medieval Europe The Catholic Church played an important role in medieval Europe and used its power to uphold its teachings Church and government leaders supported learning and the arts in medieval Europe

15 The Late Middle Ages A terrible plague, known as the Black Death, swept through Europe in the 1300’s, killing millions Western Europe was devastated by war in the 1300’s and 1400’s, as England and France fought each other and Spain and Portugal fought against the Muslims 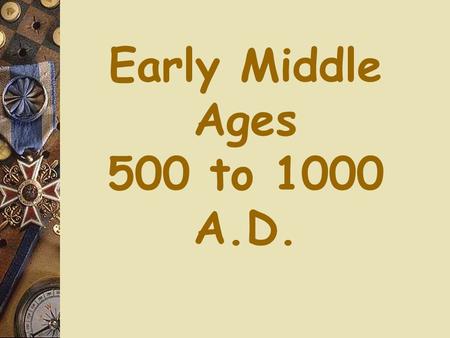