3 Christianity 100 True/False: Christianity continued to spread throughout the Roman Empire despite persecution. What is True?

4 Christianity- 200 This is the part of the Christian Bible in which a person can find the gospels. What is The New Testament?

6 Christianity - 400 This man helped the spread of Christianity by allowing it to be practiced in Ancient Rome. Who is Constantine?

7 Christianity - 500 This was the declaration that made Christianity an approved religion of Rome. What is the Edict of Milan?

8 Roman Leaders - 100 These two men were twin brothers who were said to have formed the city of Rome. Who are Romulus and Remus?

10 Roman Leaders - 300 Who was Octavian (Augustus)? He was the first emperor of the Roman Empire.

11 Roman Leaders - 400 Who was Julius Caesar? He was a military leader who joined forces with Crassus and Pompey to dominate Rome.

12 Roman Leaders - 500 Who is Augustus? His old name was Octavian, and he eventually be came known as “exalted one” or this name.

13 Roman Society – 100 What is a republic? This is the main form of government in Rome, and gives citizens the right to vote.

14 Roman Society - 200 What are patricians? In Roman society, this class of people owned a great amount of land, were wealthy and were part of the ruling class.

15 Roman Society - 300 What are plebeians? In Roman society, this class of people were merchants, craftsmen, farmers and the poor.

16 Roman Society - 400 Their responsibilities were to lead the government and army. What are consuls?

17 Roman Society - 500 This is a government that is ruled by three people. What is a triumvirate?

18 Inventions- 100 What is cement? This invention allowed Romans to build intricate, structurally sound buildings by using volcanic rock and water.

19 Inventions - 200 What are roads? This Roman invention connected cities in the empire by using stone and pavement.

20 Inventions - 300 What were the Twelve Tables? These were Rome’s first code of laws.

21 Inventions - 400 What is the Pax Romana? This was a period of peace and prosperity that began in the early second century.

22 Inventions - 500 What is the Law of Nations? This was a body of laws that was one of Rome’s chief gifts to later generations.

23 Miscellaneous - 100 What are Etruscans? These were people who expanded into Italy from Etruria.

24 Miscellaneous - 200 What is Italy? Rome is now the capital of this country.

25 Miscellaneous - 300 What are conquered lands? This is where most of the slave sin Rome came from.

26 Miscellaneous - 400 Who are Crassus, Pompey, Caesar? The first triumvirate was made up of these three people. Name two.

27 Miscellaneous - 500 Who are Octavian(Augustus), Mark Antony, Lepidus? The second triumvirate was made up of these three people. Name two. 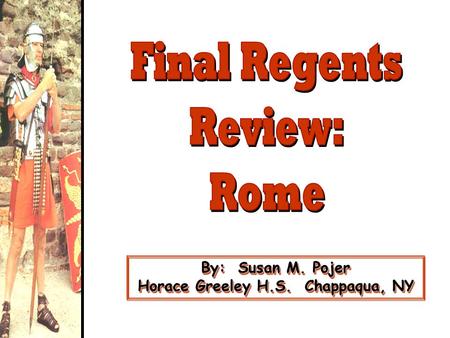 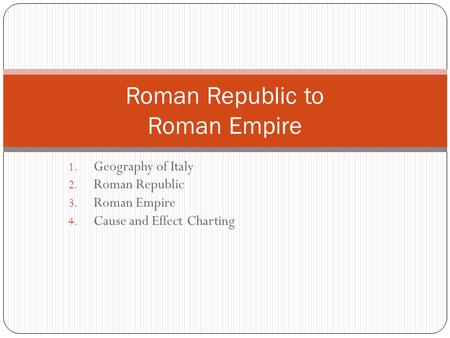 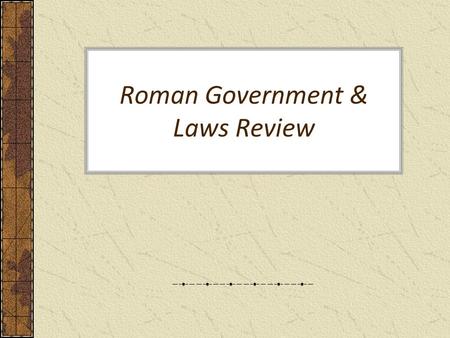 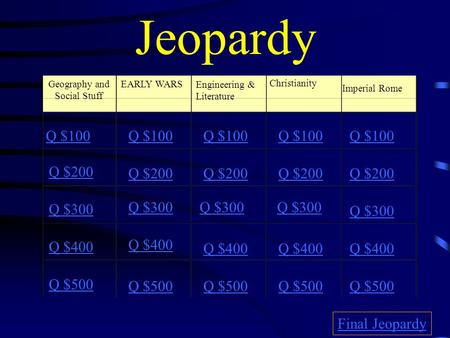 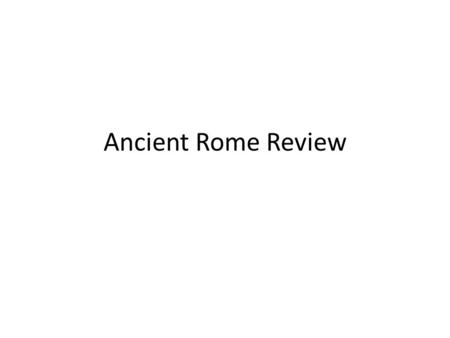