1 Literary Terms We will be using these literary terms throughout the school year. There WILL be literary terms used on your FINAL EXAMS in May!! You need to keep up with your notes. Don’t lose your terms! www.studystack.com/menu-292382

3 Character A character is a person or an animal that takes part in the action of a literary work.

6 Imagery Imagery is words or phrases that appeal to one or more of the five senses. Writers use imagery to describe how their subjects look, sound, feel, taste, and smell.

7 MOOD Mood, or atmosphere, is the feeling created in the reader by a literary work or passage. Writer’s use many devices to create mood, including images, dialogue, setting, and plot. Often, a writer creates a mood at the beginning of a work and then sustains the mood throughout. Sometimes, however, the mood of the work changes dramatically.

8 Plot Plot is the sequence of events. The first event causes the second, the second causes the third, and so forth. In most novels, dramas, short stories, and narrative poems, the plot involves both characters and a central conflict. The plot usually begins with an exposition that introduces the setting, the characters, and the basic situation. This is introduced and developed. The conflict then increases until it reaches a high point of interest or suspense, the climax. The climax is followed by the falling action, or end, of the central conflict. Any events that occur during the falling action make up the resolution.

16 External Conflict External conflict exists when a character struggles against some outside force, such as another character, nature, society, or fate. Man vs. Man Man vs. Nature

17 Internal Conflict Internal conflict exists within the mind of a character who is torn between different courses of action. Man vs. Himself

18 Flashback A flashback is a literary device in which an earlier episode, conversation, or event is inserted into the sequence of events. Often flashbacks are presented as a memory of the narrator or of another character.

19 The movie Titanic is told almost entirely in a flashback. What are some other films that contain flashback to help tell stories? Holes Willy Wonka Think of some more… Flashback continued…

20 Foreshadowing Foreshadowing is the author’s use of clues to hint at what might happen later in the story. Writers use foreshadowing to build their readers’ expectations and to create suspense. This is used to help readers prepare for what is to come.

21 Can you think of an element of foreshadowing?

22 Suspense Suspense is the growing interest and excitement readers experience while awaiting a climax or resolution in a work of literature. It is a feeling of anxious uncertainty about the outcome of events. Writers create suspense by raising questions in the minds of their readers.

23 Point of View Point of View is the perspective, or vantage point, from which a story is told. It is the relationship of the narrator to the story. First-person is told by a character who uses the first-person pronoun “I”. Third-person limited point of view is the point of view where the narrator uses third-person pronouns such as “he” and “she” to refer to the characters.

24 Setting The setting of a literary work is the time and place of the action. The setting includes all the details of a place and time – the year, the time of day, even the weather. The place may be a specific country, state, region, community, neighborhood, building, institution, or home. Details such as dialect, clothing, customs, and modes of transportation are often used to establish setting. In most stories, the setting serves as a backdrop – a context in which the characters interact. The setting of a story often helps to create a particular mood, or feeling.

25 Theme The theme of a literary work is its central message, concern, or purpose. A theme can usually be expressed as a generalization, or general statement, about people or life. The theme may be stated directly by the writer although it is more often presented indirectly. When the theme is stated indirectly, the reader must figure out the theme by looking carefully at what the work reveals about the people or about life.

27 Personification Personification is a figure of speech in which an animal, object, force of nature, or idea is given human qualities or characteristics. Example:Tears began to fall from the dark clouds. 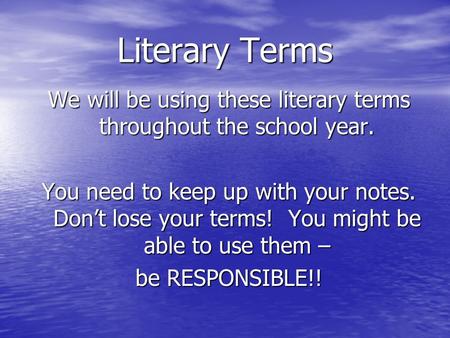 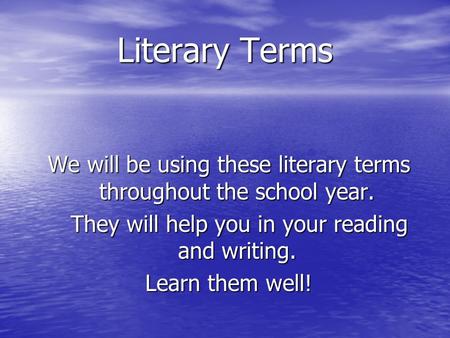 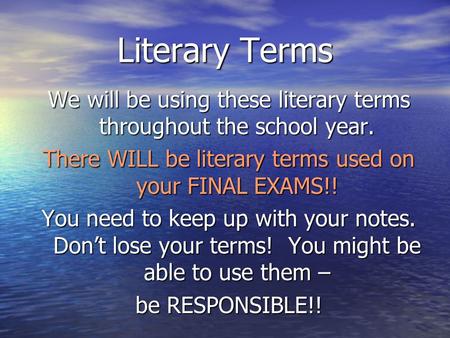 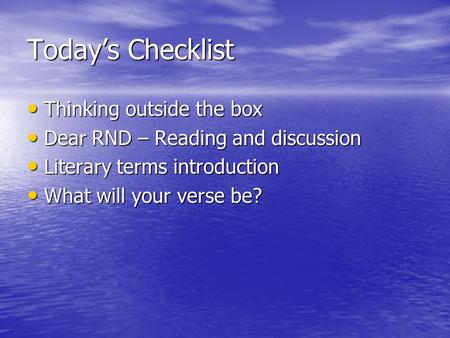