Presentation on theme: "Literary Elements. Plot: the sequence of events in a story."— Presentation transcript:

2 Plot: the sequence of events in a story

3 Exposition: the early part of a story where the following are established: tone, setting, characters, and important background information

4 Complication / Rising Action: the part of a story where the conflicts begin, are added to, and expanded

5 Climax: the point of highest intensity in a story

6 Falling Action / Resolution: occurs after the climax. this is the time when the conflicts in the story are resolved and loose ends are tied up

7 Setting: the time and place of a story

8 Conflict: a struggle between two opposing forces the conflict can be either internal (in the character’s mind) or external (against a physical force) external conflict examples: man vs. man, man vs. nature, man vs. technology

9 Situational Irony: a contrast between what a reader or character expects to happen and what actually does happen it’s the unexpected twist

10 Theme: the main idea in a work of literature it is a perception about life or human nature that the writer shares

11 Foreshadowing: the use of hints or clues to indicate events and situations that will occur later in a plot

12 Characterization: We learn about characters through: description a character’s own thoughts or words a character’s actions the narrator’s direct comments

13 Protagonist: the central character or hero in a narrative or drama

14 Antagonist: the principle character in opposition to the protagonist

15 Mood: the feeling or atmosphere the writer creates for the reader

16 Dialogue: written conversations between two or more characters in either fiction or nonfiction

17 Point of View: the method of narrating a short story, novel, narrative poem or work of nonfiction

18 First Person: The narrator is a character in the story and uses I to refer to him/herself

19 Third Person: the story is told by a narrative voice outside the action, not by one of the characters

20 Third Person Omniscient: the narrator sees into the minds of more than one character

21 Narrator: the character or voice from whose point of view events are told

22 Suspense: the excitement or tension readers feel as they become involved in a story and are eager to know its outcome

24 Symbolism A person, place, thing, or event that stands for itself and something beyond itself as well

25 Fiction Any story that is imagined or invented

Download ppt "Literary Elements. Plot: the sequence of events in a story." 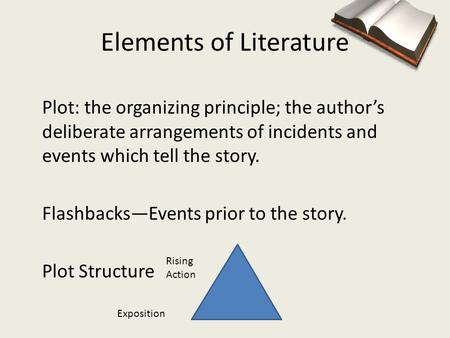