5 Problems with the semantic def. Not so clear cut: The assassination of the president… Sincerity is an important quality Tucson is where New Yorkers flee for the winter Multiple parts of speech? They cannot still her brave clear voice. [V] It was a still cold night. [A] They will dance until dawn. [V] One dance was all she would grant him.[N]

7 Problems with the semantic def. Cross-linguistic Problems Kwamera – a)Iak-imiki Kuri u [verbs take tense] 1sg.dislike dog this “I don’t like this dog” b)ianpin iak-am-óuihi ihi [óuihi takes tense] when 1s-prog-small still “when I was still small”

13 P.O.S. (classes of verbs) Main verbs versus helping verbs – John has been eating shrimp – John may eat some shrimp. – John did not eat shrimp. Technical term for helping verb: Auxiliary – Modal aux: may, should, can, will, would, might,… – Aspectual aux: have, be – Support aux: do

16 Distinguish Adverbs from Adjectives? Adverbs: modify any category but nouns, never combine with -ly Adjectives: modify nouns, combine with -ly But they are in complementary distribution: – part of the same category? Also both take the same modifiers (eg. ‘very’) We’ll be agnostic on this point and abbr. both Adv & Adjs as “A”, but the jury is still out on this one.

18 Cross-Linguistic Variation in POS Each language has its own set of distributional criteria. Not all languages have the same sets of parts of speech as English. Some may have less (eg. They may not distinguish verbs from adjectives) or they may have more! 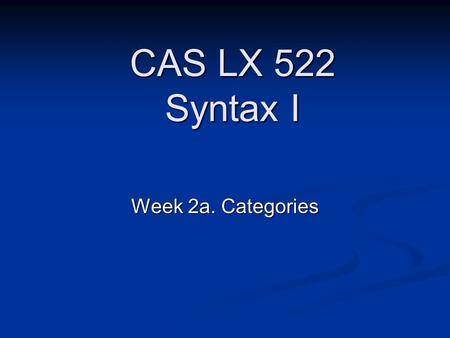 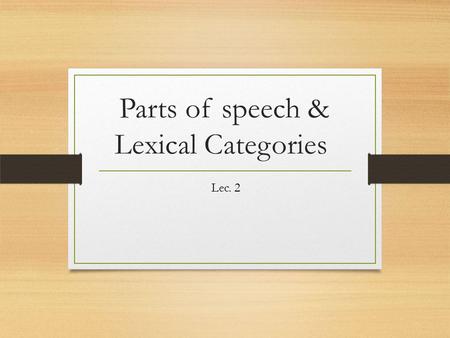 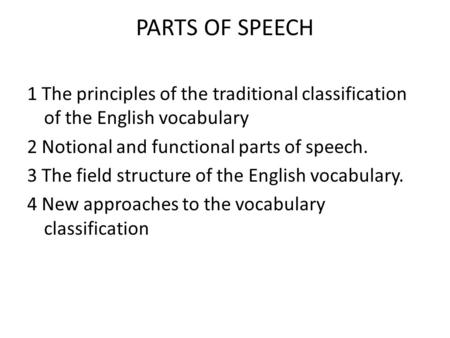