Presentation on theme: "By: Vanessa Ponce Period: 2 MOOD DISORDERS.  What is the difference between major depression and the bipolar disorder?  Can a mood disorder be inherited."— Presentation transcript:

2  What is the difference between major depression and the bipolar disorder?  Can a mood disorder be inherited or caused by a certain thing? ESSENTIAL QUESTIONS

3 Mood disorders refer to a category of mental health problems which include all types of depression and bipolar disorder. Sometimes called affective disorders.  More difficult to diagnose mood disorders in children, especially since children aren’t always able to express how they feel.  At any age, mood disorders put individuals at risk for other conditions that may last awhile after an episode of depression being resolved. WHAT ARE MOOD DISORDERS?

4  Aren’t well known  Chemicals in the brain called endorphins that are responsible for positive moods  Other chemicals in the brain called neurotransmitters, regulate endorphins  Depression is more likely causes by a chemical imbalance in the brain  Some disorders are considered to be multifactorially inherited (meaning many factors are involved)  The factors produce a trait/condition that are usually genetic and environmental  One gender is affected more than the other CAUSES

6  Major depression- 2 week period of a depressed mood along with other signs of a mood disorder  Bipolar disorder (Manic depression)- At least one episode of a depressed or irritable mood for at least 2 years  Dysthymia (dysthymic disorder)- A chronic, low-grade, depressed, or irritable mood for at least two years  Mood disorder due to a general medical condition- Many medical illnesses can trigger symptoms of depression  Substance induced mood disorder- Symptoms of depression that are due to the effects of medication, drug abuse, alcohol abuse, or other forms of treatment. DIFFERENT TYPES OF MOOD DISORDERS

7 Major depression is also known as clinical depression, it is a state of excessive depressive symptoms. With MD it is difficult to work, study, sleep, eat, and enjoy friends and activities.  Some have clinical depression once in their life, others have it several times in a lifetime.  Seems to occur from one generation to the next in some families  Also can affect someone with no family history of the illness MAJOR DEPRESSION

9 Depression treatments aren’t always affective.  Two-thirds of people with depression aren’t always helped by the first treatment, up to a third don’t even respond to several attempts of treatment MAJOR DEPRESSION TREATMENT

10  Simplify Your Life: Take it easy and set reasonable goals for yourself.  Write in a Journal: Part of treatment, may help improve moods by allowing you to express your emotions with writing.  Don’t Become Isolated: Try to get involved in social activities and get together with friends or family regularly.  Take Care of Yourself: Eat healthy, be active, and get plenty of sleep  Don’t Make Important Decisions When Down: Since you’re not thinking clearly avoid making big decisions when you’re feeling depressed HOW TO COPE

11 Bipolar disorder is a brain disorder that causes unusual swifts in mood, energy, activity levels, and the ability to do everyday tasks.  Can be treated (Has medication)  Two types: Bipolar disorder 1 and 2 BIPOLAR DISORDER

14  Be Patient: Don’t expect to be cured right away, have patience towards treatment process and it will take time to find a program that works with you.  Communicate With Your Treatment Provider: Your treatment program with change overtime so keep close contact with your doctor/therapist, also be honest with your provider about your symptoms and medication side effects.  Take Medication as Instructed: Follow instructions and take it correctly. Don’t skip or change your dose without talking to your doctor. TIPS TO BE SUCCESSFUL WITH TREATMENT

15  Become An Expert: Learn about your disorder and all you can about the medications. Keep up with current research and treatment options.  Engage in Your Treatment: The relationship with your health care provider is key to the successful management of your disorder, you must build trust and a strong line of communication.  Fin Support: Emotional support from other with disorder is an important part of recovery, its helpful to share thoughts, fears, and questions with others with the same illness.  Get Healthy: Maintain a well balanced diet, exercise regularly, and get plenty of sleep. HOW TO COPE

Download ppt "By: Vanessa Ponce Period: 2 MOOD DISORDERS.  What is the difference between major depression and the bipolar disorder?  Can a mood disorder be inherited." 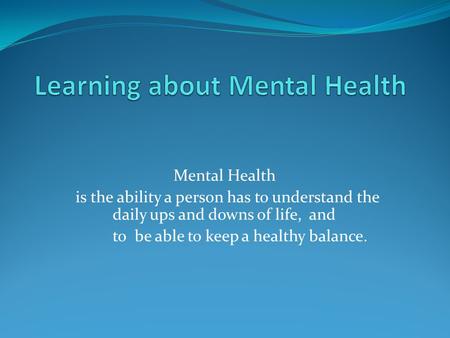 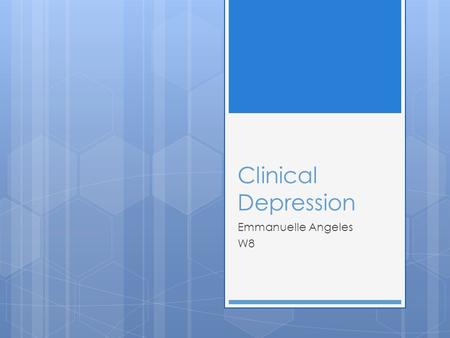 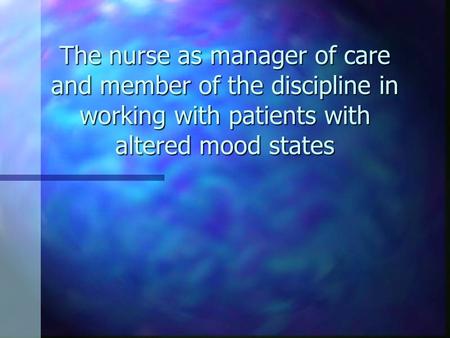 The nurse as manager of care and member of the discipline in working with patients with altered mood states. 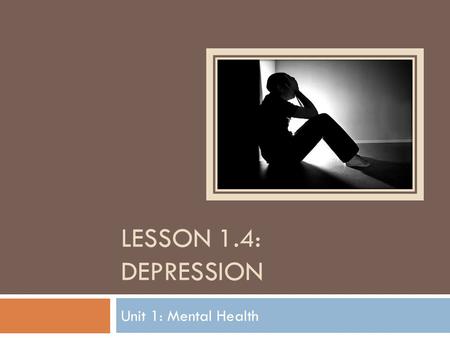 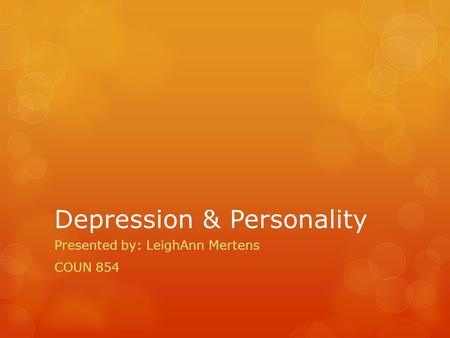 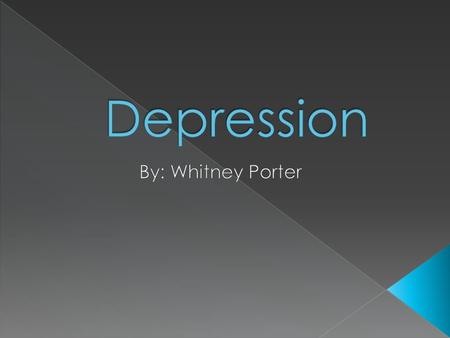 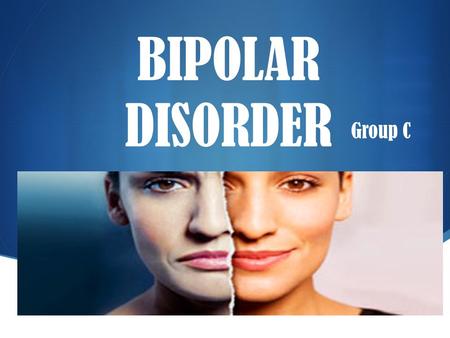 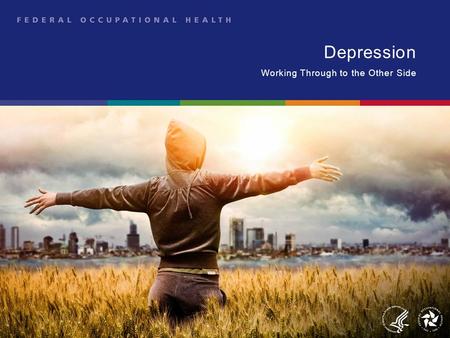