3 Major Depressive disorders Single episode: if there is a single major depressive episode Recurrent episode is diagnosed if there are two or more major depressive episodes at least two months apart and there have never been a mania, hypomania or mixed episodes  Some recurrent episode occurs in association with particular seasons The symptoms must be present most of the day, every day, for at least two weeks. And the symptoms must cause distress or impaired function.  The severity of the first episode predicts persistent episodes. Mood disorders - Episode (Major depression)

4 DSM IV TR Criteria for Major Depression A. At least five of the following symptoms must be present for two weeks and represent change from previous level of functioning; at least one of the symptoms is either (1) depressed mood or (2) loss of interest and pleasure 1- Depressed mood most of the day, nearly every day, as indicated by subjective report or observed by others. In children or adolescent the mood can be irritable 2- Markedly diminished interest or pleasure in all, or almost all, activities most of the day, nearly everyday (as indicated by either subjective account or observation made by others) 3- Significant weight loss when not dieting, or weight gain or change in appetite. For children could be represented by failure to gain expected weight Mood disorders - (Major Depression, DSM IV criteria)

5 4- Insomnia or hypersomnia (Inability to sleep or sleeping all the day) 5- Psychomotor agitation or retardation nearly everyday (observed by others) 6- Fatigue or loss of energy nearly everyday 7- Feeling of worthlessness or excessive or inappropriate guilt nearly everyday 8- Diminished ability to think or concentrate, or indecisiveness nearly everyday 9- Recurrent thought of death (not just fear of dying), recurrent suicidal ideation without a specific plan, or suicidal attempt or specific plan for committing suicide Mood disorders - (Major Depression, DSM IV criteria) -Continued

6 B. The criteria do not meet criteria for a mixed episode C. The symptoms cause clinically significant distress or impairment in social, or other important areas of functioning. Psychotic features may be present with depressive episodes and are described as congruent or incongruent  Congruent symptoms include delusion or hallucination consistent with depressive theme (e.g. inadequacy, guilt, death, punishment)  Incongruent symptoms include thought broadcasting and delusions of control Clinical picture vary in its features and severity of the symptoms. People with depression are more likely to experience pain, and physical illness along with decreased physical, social, and role functioning. Up to 15% of people with severe depression will die by suicide

7 Dysthymic disorder: Similar to and milder than major depressive disorder that clinically lasts most of the day for a majority of two years rather than episodically. S&S may include feelings of inadequacy, guilt and excessive anger, along with periods of social withdrawal and reduced activity or productivity  This mood disorder classified as chronic.  Dysthymic disorder may be classified according to the age of onset: early and late. Premenstrual dysphoric disorder: include depressed mood, severe anxiety, mood swing, and decrease interest in activities during the week prior the menses. Postpartum Depression: diagnosed if onset is within 4 weeks after childbirth (Dysthymic disorder & other disorders)

10 Risk factors for Suicide BiopsychosocialEnvironmentalSociocultural Mental disorders, particularly mood disorders, schizophrenia, anxiety disorders, and certain personality disorders Local clusters of suicide that have a contagious influence Barriers to accessing health care, especially mental health and substance abuse treatment Alcohol and other substance use disorders Easy access to lethal means Lack of social support and sense of isolation HopelessnessRelational or social loss Stigma associated with help- seeking behavior Impulsive and/ or aggressive tendencies Job or financial loss Certain cultural and religious beliefs History of trauma or abuseExposure to, including through the media, and influence of others who have died by suicide Some major physical illnesses Previous suicide attempts Family history of suicide 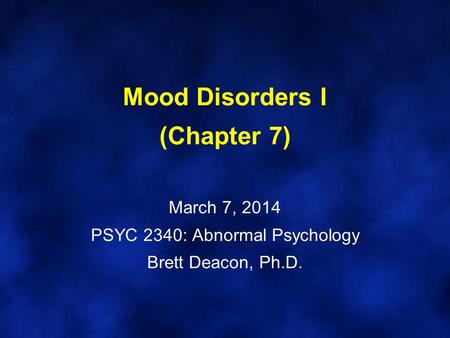 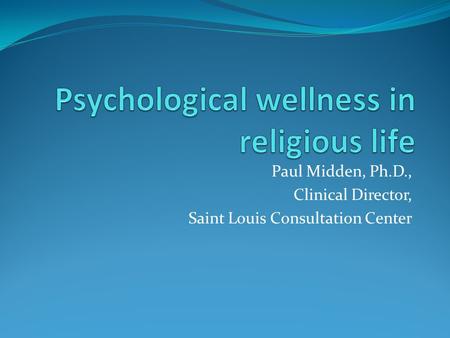 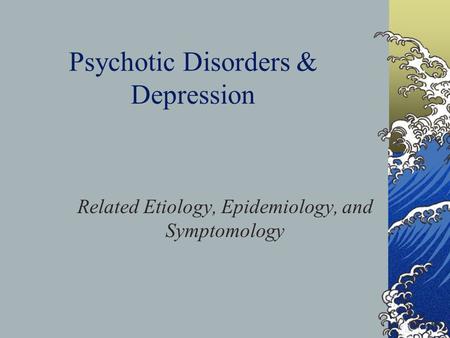 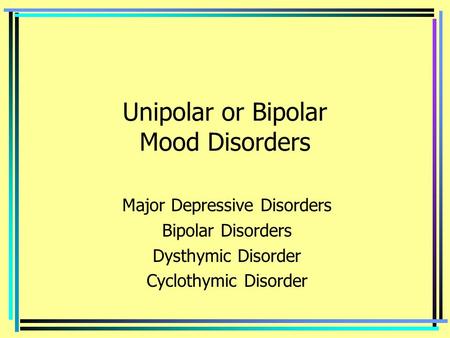