1 The Sounds of language Chapter 3

2 The Power of Language Humans are the only animals with complex verbal language What do you need to know in order to understand language?

3 The Power of Language Example: “My boyfriend and I are flying to his mother’s next week.” Distinct sounds Each word has a specific meaning Different tenses Implicit meanings Order of the words

5 Introduction To learn a language, you must learn sound production
Rules for producing any sound in any human language You must also learn phonology Many sounds in other languages will not be the same as those in your native language

6 phonology The study of sounds in a language
It focuses on two differences 1. phonetics Identifies and describes language sounds 2. phonemics Analyzes the way sounds are arranged in a language

8 Language and Sound In other words,
Linguists describe and analyze the nature and patterning of sounds These patterns make the phonological system and the study of this is phonology When you speak you do not consciously think of sounds The word “debt” How many sounds does this have? How is this different from “pet”?

10 Phonology A phonemic chart shows only the distinctive sounds of a language, and all sounds made by one letter are grouped together The sounds on the chart are called phonemes

13 Rosetta stone Egyptian hieroglyphs are not pictures, they are phonemes
medieval/Ancient/v/rosetta-stone--196-b-c-e

17 Sounds Phonemes are the particular sounds that speakers and listeners recognize as distinct from other sounds This gives different sounds different meanings Compare: /b/ and /p/ Put your hands on your ears and say these sounds out loud /b/ causes vibrations and is called voiced (others: /d/, /z/, /v/, /j/) /p/ does not and is called voiceless (others: /t/, /s/, /f/)

21 Vowels and consonants: Articulation
“Bilabial Stop” Bilabial (with both lips) Stop (stop the air and then let it out) “B,” “P” Turn to pg and look over articulation places and manners Practice: Alveolar nasal “N” Palatal approximate “J” Velar stop (plosive) “K,” “G”

22 Vowels and consonants: Articulation
Be familiar with the terms for place and manner

24 Vowels and consonants: Articulation
These are guidelines Different dialects and accents can make these sound differently

25 Beyond phonetic charts
Phonetic charts show the basic sounds, or segments, of language But language can further modify sounds These are called suprasegmentals are have their own special symbols in a phonetic chart Nasalization: sound goes through nasal cavity and not mouth Pitch: high or low “notes” Clicks: air released inward (symbol is ! In Kung) Lengthening: holding sound for longer period of time

27 phonemics In order to really understand and speak a language, you need to also know how the sounds are used Phonemics/phonology analyzes the way sounds are arranged and what sounds are important in a language Phonemics can give you an insider (emic) view of a language

28 phonemics Phoneme is a sound that functions to distinguish one word from another Example: “t” and “d” are different sounds, and also distinguish the word “tie” from the word “die” This is also a minimal pair, or a pair of words in which one difference in sound makes a difference in meaning This is how to identify phonemes

29 phonemics Allophones are another type of phoneme; they are a group of sounds that together form a single phoneme Each allophone is a separate unit but all together they make up a phoneme Wherever you find allophones in a language, there is a good chance you will also find a pattern that defines how and where they are used in a language Example: [ph] (aspirated p sound) usually occurs at the beginning of words [p] (unaspirated p sound) usually occurs in the middle of words

31 phonemics The previous example is one of complementary distribution (the different variations, or allophones, are distributed between different words) Conditioned variation means variation in allomorphs happens because of the sounds around them Sometimes this can be social Men and women can pronounce words differently (example, pg. 69) Even if two languages have the same phones, they may not group them into phonemes and allophones the same way How does “ng” sound in our language? Where is it found in a word? How do you pronounce ngoma (drum)? Why is this difficult?

33 Voice quality and intonation
AKA tone of voice Most commonly noticed type of paralanguage What does it mean when you whisper? What does it mean if you whine? How do you talk to a baby? Trend of ‘rising intonation’ (began with “Valley Girl”): voice goes up at the end of a sentence How can this be confusing with meaning? 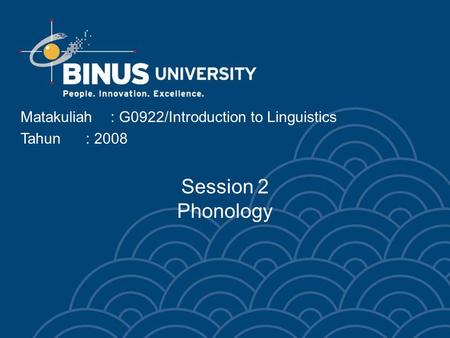 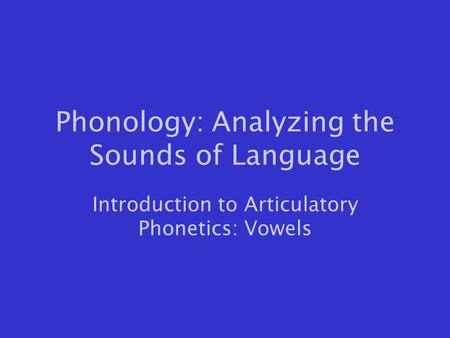 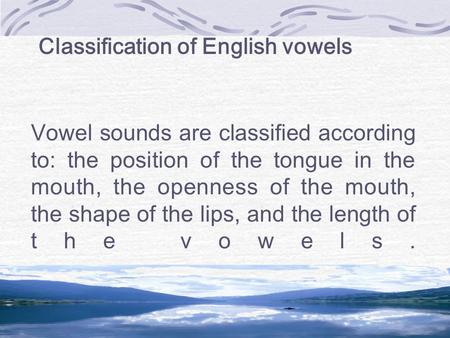