3 Vertical Profiles of Temperature and Salinity A. Unlike the atmosphere, which is heated from below, oceans are heated from above, primarily by Sun, largely at the Equator. B. Two overall layers 1. Thin, warm, less dense surface layer well mixed by turbulence generated by wind 3. Thermocline is the boundary between the layers 2. Thick, cold, denser deep layer that is calm and marked by slow currents

5 Effects of surface winds on the oceans 1. Currents converge toward Equator following Trade Winds and ITCZ 2. Westward flow along Equator (i.e., North and South Equatorial Currents) 3. Equatorial Currents turn poleward where they encounter land barriers (e.g., Gulf Stream) 4. Eastward flow of currents is enhanced by the Westerlies 5. Currents turn toward the Equator where they encounter land barriers, completing the gyres

6 Effects of surface currents on heat transfer The equator-to-pole energy transport by the ocean is important in reducing the pole-to-equator temperature differences. Currents moving out of the tropics carry heat poleward Currents moving away from the poles carry cold water equatorward

7 Heat Transfer in the North Atlantic Ocean Image by NOAA’s AVHRR Satellite in June of 1984. The warm Gulf Stream current (27°C, 80°F) redistribute heat by swirling through the cooler water to the north and east.

11 Cold Water Upwelling Maps of west coast sea surface temperature indicate regions of significantly cooler water that has up welled from below.

12 Zones of upwelling in global oceans

13 Summary: What percentage of the earth does ocean cover and how deep the ocean is on average? Why is ocean so important in determining Earth’s climate? What is the ranges of sea water density, freeze point, salinity and albedo? What determine the ocean currents? What role does ocean play in heat transport of the climate system? What cause upwelling and downwelling of ocean water?

14 Summary: What percentage of the earth does ocean cover and how deep the ocean is on average? –Covers 72% of the earth and about 4 km deep. Why is ocean so important in determining Earth’s climate? –greatest storage for water and heat for the climate system. What is the ranges of sea water density, freeze point, salinity and albedo? –1.034-1.035 X1000 kg/m3, -1.9C, 3.4~3.5%, 5-10% What determine the ocean currents? –Wind stress, Coriolis forcing, sea level gradient What role does ocean play in heat transport of the climate system? –Subtropical gyros transport warmer water poleward and cooler water equatorward. What cause upwelling and downwelling of ocean water? –Wind stress and Ekman effect 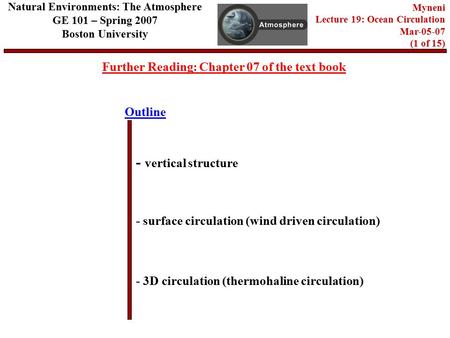 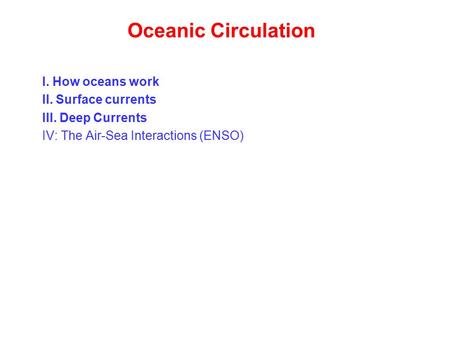