2 The global atmospheric circulation and its seasonal variability is driven by the uneven solar heating of the earth’s surface.

4 Because earth’s rotation axis is tilted relative to the plane of its orbit around the sun, there is seasonal variability in the geographical distribution of sunshine. March December June September

8 As air becomes cooler, its capacity to hold water in vapor form decreases significantly. This is known as the Clausius-Clapeyron relationship. This means that if air containing water vapor cools down, it will eventually become saturated with water vapor. As the air cools further, enough water vapor condenses into droplets to maintain the air at its saturation point.

9 Measurements of water vapor in the atmosphere at Black Rock Forest during the early fall of The saturation curve of water vapor is clearly evident. Graphic courtesy of John Knox

13 In the lowest 10 km of the atmosphere, temperature decreases with height. So when warm air rises from the surface, it cools. Because of the Clausius-Clapeyron relationship, this often means that the air is quickly brought to saturation. Condensation begins, and clouds form. If the air is especially buoyant, condensation continues, causing the water droplets to increase in size. Eventually the water droplets are so large they begin to coalesce and fall as precipitation. For this reason, rising motion is often associated with precipitation.

17 In addition to understanding how temperature affects the atmospheric circulation, we also need to understand one of the basic forces governing air and water motion on earth: The Coriolis Force. But to understand this effect, we first need to review the concept of angular momentum conservation.

20 If an initially motionless object moves from the equator northward, it will move closer to the earth’s axis of rotation, and will have to acquire speed in the direction of the earth’s rotation. This results in an apparent deflection to the right. Similarly, an initially motionless object at the equator moving southward into the southern hemisphere will undergo an apparent deflection to the left.

24 Hurricane Katrina 2005 Air moving toward low pressure at the center of the hurricane is deflected to the right, resulting in a spiral trajectory of air toward the hurricane’s center. This is visible in the clouds generated by the storm.

27 Temperature, salinity, and density are the key variables describing the state of the ocean. Density is a function of both temperature and salinity. As water warms, it expands and becomes less dense. Dissolved salts are heavier than water, so density increases with salinity.

35 Ekman drift refers to the mechanical response of the ocean to wind blowing across its surface. The surface water is dragged along with the wind. However, due to the Coriolis force, it is deflected somewhat to the right (in the NH). The surface water drags along the water immediately beneath it but at a somewhat slower speed, and this layer is also deflected to the right under the influence of the Coriolis force. The result is a spiraling pattern in the current direction with ever decreasing current speeds with depth. The net transport of water is to the right of the wind.

39 Another effect is that seawater tries to flow down the “hill” of water in the middle of the basin. As it does, the Coriolis force deflects it to the right. This is what generates the clockwise circulation or gyre.

41 An example of gyre flow at the western boundary of the Atlantic: The Gulf Stream

44 The Ekman mechanism also drives Equatorial Upwelling
The Ekman mechanism also drives Equatorial Upwelling. Recall that near the equator, trade winds blow toward the west. These winds transport water poleward in both hemispheres, forcing cold deeper waters to the surface at the equator. It turns out that deep waters are very rich in nutrients. For this reason, zones of upwelling can be very clearly seen from satellite images of chlorophyll, the chemical that makes plants green. 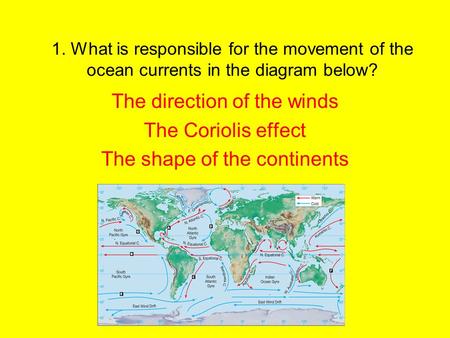 The direction of the winds The Coriolis effect 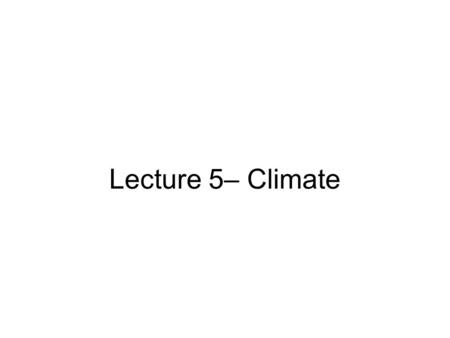