4 Ocean Circulation very different than atmosphere because: it is warmed from above, not below. Thus, convection due to solar heating is not the primary mover of the ocean. Ocean temperatures respond slowly (heat capacity), and therefore the lateral temperature and density gradients are small Solar radiation plays a more indirect role: sea surface temperatures (SSTs) affect the atmospheric temperature and pressure gradients, and the atmospheric winds. Atmospheric winds drive the ocean surface circulation patterns wind stress is the force of the wind on the ocean surface (friction) Coriolis force acts on currents similarly to winds

5 Idealized winds would result in an idealized ocean circulation, with gyres

6 actual ocean circulation has gyres similar to ideal, but different due to different arrangement of land masses

9 GYRES: GEOSTROPHIC CURRENT Areas of convergence introduce another force: gravity (due to the height difference between the center and the outside). three forces: friction (with the wind), coriolis, and height (i.e. pressure gradient) (should sound familiar to you). The result of these is that the circulation is often geostrophic, and often parallel to the height gradients

11 WHY ARE WESTERN BOUNDARY CURRENTS DIFFERENT THAN EASTERN? Vorticity: tendency to spin or rotate Conservation of vorticity: absolute vorticity (planetary + relative) does not change Planetary Vorticity: zero at equator, higher at the poles (positive, or counter clockwise, in Northern Hemisphere) Relative Vorticity: tendency to spin from local winds and currents On the western boundary, northward flow increases planetary vorticity, so the relative vorticity has to decrease. On the eastern boundary the decrease in latitude decreases planetary vorticity, so the relative vorticity has to increase So, …

14 SALINITY NOTE: Some of these will be important when studying the carbon cycle

15 SALINITY 1.Why is salinity important for ocean circulation? 2.From where does the salt in the ocean originate? 3.To where does the salt in the ocean go? 1. Salinity, in addition to temperature, determines the density of the water, which is the driving force for deep ocean circulation. 2. The source of salts in the ocean is weathering. This is the process whereby water flowing over and through the land picks up dissolved minerals (i.e. salts). Those waters eventually flow out into the ocean.

16 3. Salts do not evaporate along with the ocean water. So, when ocean water evaporates, it leaves the salts behind. This would lead to ever-increasing salt concentrations if there were no other sinks. Sinks of salt in the ocean include: In shallow seas evaporation leaves such high salt concentrations that the water becomes saturated, and the resulting precipitate forms evaporite deposits. Removal of salt by microorganisms to form shells, some of which are eventually deposited on the ocean floor. Chemical reactions with newly formed sea floor Removal by wind from evaporated sea spray SALINITY

17 Over long time periods, and averaged over the globe, the amount of salt in the oceans is in dynamic equilibrium. Regionally, there can be differences in salt concentrations due to variations in the salt concentration of river runoff, and the amount of precipitation, runoff, and outflow. For example, where evaporation exceeds precipitation, and there is little runoff, salinity usually increases. SALINITY

18 THERMOHALINE CIRCULATION Deep ocean circulation. Driven by density variations which are due to temperature and salinity variations. Slower than surface circulation, but important over long time scales (100s to millions of yrs) 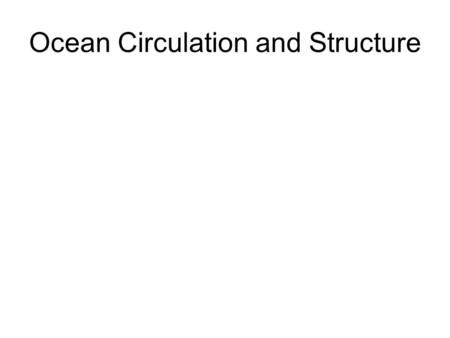 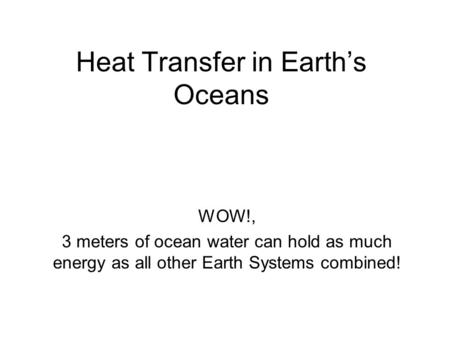