3 Currents Water in oceans can sink, rise, and flow horizontally

5 A. Ocean currents – predominantly horizontal movement of ocean water
Carry energy and matter from one part of the ocean to another

8 B. Density is determined by 2 factors
1. Temperature The sun does not warm the ocean water evenly

10 B. Density is determined by 2 factors
Cold water is more dense and sinks Warm water is less dense and stays at the surface

11 B. Density is determined by 2 factors
2. Salinity Concentration of dissolved salts in the seawater Expressed as parts per thousand Approximately 35 parts per thousand (35 g salts per 1000 g water) Higher salinity = higher density

12 B. Density is determined by 2 factors

13 B. Density is determined by 2 factors
Surface water can change in density by changing salinity due to excess rain or increased evaporation or where rivers enter the ocean

16 A. Surface layer Winds mix the water vertically so temperature and salinity remain relatively constant through the first 100m-200m of depth

18 C. Water masses are named for the location where they are formed
Examples: Antarctic Bottom Water North Atlantic Deep Water

19 D. Water masses sink at the poles and move along the ocean floor

20 III. What causes the deep circulation?
A. Giant convection cells Convection is the rising and falling of heated and cooled fluids due to changing density

21 B. How does the cold deep water mix with the warmer surface water?
 Still being studied at this time, but it is that the movements of the tides is a possible cause of mixing

22 IV. Surface Currents Extend down to depths of about 200m
A. Surface currents flow for long distances across the ocean 1. Form gyres, which are circular cells of motion of the surface water

25 B. Gyres help transport energy and matter from low latitudes to the higher latitudes.

28 D. Eckman Drift – horizontal movement of water resulting from the balance of the Coriolis effect and wind stress

29 1. Causes water to move at an angle to the right of the general wind direction (90o)
2. Causes a “mound of water” which balances out the Eckman Drift

30 E. Upwelling Strong upward movement of water from the deep to the surface

31 E. Upwelling 1. As water moves away from the coastline due to the
Eckman Drift, more water flows up to replace it from deeper in the ocean. 2. The upward movement brings nutrient rich deep water to shallow areas for animals and plants to use 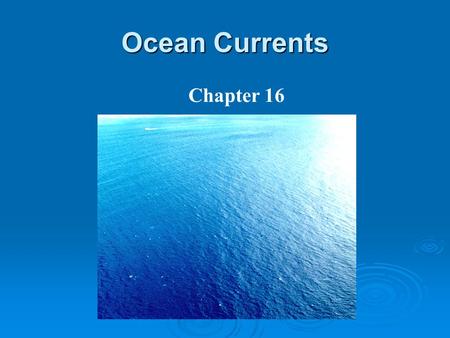