3 The Atmosphere – yup, it’s gassy.
Surrounding Earth is a sea of gases called the atmosphere. The atmosphere holds the air necessary for life on the planet. The atmosphere is also important as the source of Earth’s weather and climate patterns.

5 The Atmosphere – yup, it’s gassy.
Weather is the state of the atmosphere at any given moment. Climate refers to the different kinds of weather at a particular place over a long period of time. Climate, like landforms and bodies of water, is important to plant, animal, and human life. Different plants and animals can live only in certain climates.

6 The Atmosphere – yup, it’s gassy.
People have learned to adapt to a number of climates. The kinds of food that people grow are also influenced by climate. The climate of any given place is caused by a number of factors related to location. 1. Where it is in relation to the equator 2. Its nearness to large areas of land or water 3. Altitude above sea level

7 The Effect of Latitude -
Where is it in relation to the equator? How far north or south of the equator a place is located – its latitude – is important in determining climate. Because the surface of the planet is curved, the sun’s rays hit Earth at different angles.

8 The Effect of Latitude

10 The Effect of Latitude -
Areas in the middle latitudes receive vertical rays only part of the year, which creates the seasons. Called temperate zone In temperate places the overall climate is neither very hot nor very cold, although temperatures can be very hot or very cold at times, depending on the season.

11 The Effect of Latitude -
Seasons occur because Earth is tilted on its axis 23.5 degrees in relation to Earth’s path around the sun. This tilt exposes the Northern and Southern Hemispheres to the more vertical rays of the sun at different times of the year.

14 Tropics – the Effect of Latitude
Around December 22the vertical rays of the sun hit Earth at 23.5 degrees south latitude. Farthest south the vertical rays reach Called the Tropic of Capricorn The word tropic refers to the area on Earth at or near the equator.

15 REVIEW - How does latitude affect climate on Earth?

16 The Effect of Land and Water
2. Its nearness to large areas of land or water Heating and cooling differences between land and water effects climate. Land heats quicker than bodies of water Land cools quicker than bodies of water Water takes longer to warm up but it stays warm longer. Result: places in the middle of a large continent are likely to be much colder than places along the coast.

17 The Effect of Land and Water
Ocean currents also affect the temperatures of some land areas. Examples: North Atlantic Drift Current brings warm temperatures to Western Europe as it flows across the Atlantic Ocean from the Gulf of Mexico. Without the effect of this ocean current, Western Europe would have a much colder climate.

19 The Effect of Land and Water
The differences in the heating and cooling of land and water also cause winds. During daylight hours, air over land is heated more quickly than air over water. Cooler air from the water blows in and pushed the warmer air up. Sea Breeze At night, the land cools more quickly than the water. Warmer air over the water is pushed up by the cooler air blowing out from the land. Land Breeze ions.com%2Fwinds-in-maritius-i-110.html&ei=wbEEVN3COaXJ8AHas4HIBA&bvm=bv ,d.eXY&psig=AFQjCNGmDI6quu1ynV-SKMKGnOrD26_cIg&ust=

20 Review: How do land and water affect climate?

21 The Effect of Altitude A 3rd major effect on climate is the elevation, or altitude, of landforms above sea level. Going up a mountain is something like moving from the equator to one of the poles. The air temperature gets cooler the higher you go. For every 1,000 feet of altitude , the temperature drops almost 3 degrees Fahrenheit.

22 The Effect of Altitude Because of the effects of altitude, it is possible to find a place with a cold climate in a larger region with a warm climate. Example: Tanzania (East Africa)- warm climate, has snow and ice all year long on top of Mount Kilimanjaro.

24 Climate and Vegetation
There are six major climate regions on Earth: Tropical Desert Temperate warm Temperate cold Polar Highland Each of the six regions its own climate patterns and its own kinds of plant life, or vegetation.

26 Rainforest Rain Forests:
Average yearly temperature is close to 80 degrees Fahrenheit Rainfall may reach as much as 100 inches in a year Rain forests with thick vegetation and tall trees exist in many areas of the tropical climate. Amazon River (South America) Congo River (Central Africa) Islands of Indonesia and Malaysia in SE Asia

27 Desert Little precipitation for the whole year.
Considered “arid” or dry An area that receives 10 inches or less of precipitation in a year Can be hot or cold

28 Desert To survive a desert climate, vegetation has adapted to the arid surroundings. Some plants have leaves and stems that store much water. Others have long root systems that reach water over a large area. Most desert plants grow far apart from each other so they do not compete for the same water supply.

31 Climate and Vegetation – Temperate Cold
Areas with a temperate cold climate are mostly inland. In this kind of climate, big changes in temperature take place from summer to winter, and there are about the same amounts of precipitation all year. Temperate cold climates support a variety of trees that grow in thick forests.

35 Climate and Vegetation- Highland Climate
Places in hilly or mountainous regions have a highland climate. This kind of climate cannot be defined exactly. Temperature, precipitation, and vegetation may all vary depending on altitude, the main winds, and the rain shadow.

38 Answer the questions in your notes.
Questions must be answered in complete sentences. Refer back to your notes to answer them. 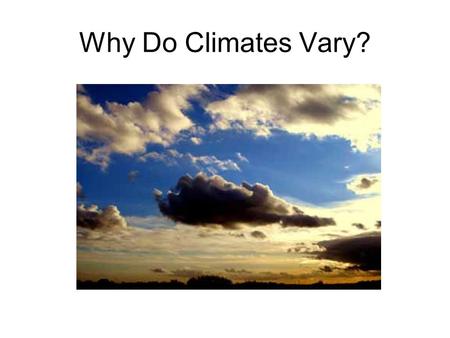 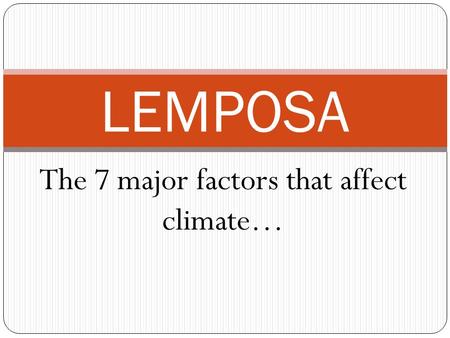