3 Factors that Affect Temperature
Latitude, elevation and the presence of ocean currents are three natural factors that affect the temperature at a particular location.

4 Latitude Latitude is the measure of the distance north and south of the equator. Latitude is measured in degrees. Areas close to the equator, or 0 degrees latitude, receive the direct rays of the sun. These direct rays provide the most radiant energy. Areas near the equator have a warm climate. Polar regions have a cold climate.

7 Factors that Affect Precipitation
The two factors that affect the amount of precipitation at a particular location are prevailing winds and mountain ranges.

9 Direction of Prevailing Winds
The direction from which a prevailing wind blows also affects the amount of moisture it carries. Some prevailing winds blow from the water to the land (sea breeze).

10 Desert A region that receives less than 25 centimeters of rainfall a year is called a desert. The combined effect of a prevailing wind’s moisture content and its direction can make it possible for a desert to exist near a large body of water. The Sahara Desert is bordered on the west by the Atlantic Ocean. The prevailing winds that blow across the Sahara originate far inland, carry little moisture and are caused by sinking cold air.

11 Mountain Ranges The amount of precipitation at a particular location is also affected by mountain ranges. A mountain range acts as a barrier to prevailing winds. The windward side of a mountain has a wet climate. On the leeward side, relatively dry air moves down the side of the mountain and results in very little precipitation. A good example is the Great Basin on the leeward side of the Sierra Nevada Mountain Range.

12 Climate Zones The Earth’s climate can be divided into general climate zones according to average temperatures. Scientist classify localized climates as microclimates. The three major climate zones on the Earth are the polar, temperate, and tropical zones.

13 Polar Zones In each hemisphere, the polar zone extends from the pole to about 60 degrees latitude. In polar zones, the average yearly temperature is below freezing. There are some areas in the polar zones, such as the northern coasts of Canada and Alaska and the southern tip of South America, where the snow melts during the warmest part of the year.

15 Deserts in the Temperate Zone
Deserts in the temperate zones are usually located in land, far away from the oceans. The winds that blow across these inland deserts carry little moisture. Although very hot during the day, temperatures at night can drop to below freezing. Inland deserts are found in Australia (the Great Sandy Desert) and Central Asia ( the Gobi Desert).

16 Tropical Zones The tropical zones, which extend from 30 degrees north and south latitude to the equator, have high temperatures and high humidity. Tropical zones are also known as low-latitude climates. The average temperature during the coldest month of the year does not fall below 18 degrees C. Many deserts are located on the western coasts of the continents. This is because the prevailing winds, the trades, blow from east to west.

18 Changes in Climate The three natural factors responsible for climate changes are the slow drifting of the continents, changes in the sun’s energy output and variations in the position of the Earth relative to the sun. These natural factors are not related to human activity. The results of the human activity of the burning of fossil fuels may also lead to changes in climate.

19 Ice Ages Periods when much of the Earth’s surface has been covered with enormous sheets of ice are called ice ages or major glaciations. Scientists have found evidence of four major ice ages during the last 2 million years each lasting about 100,000 years. The average temperature was 10 to 15 degrees C. The causes are not known but they are probably associated with variations in the tilt of the Earth’s axis and the shape of the Earth’s orbit around the sun.

21 Drifting Continents About 230 million years ago, all the Earth’s landmasses were joined in one super continent, Pangaea. The slow drifting apart of the continents caused dramatic changes. As the continents moved toward their present-day locations, the sea level dropped, volcanoes erupted, and much of the Earth’s surface was pushed upward. The combined effect was a drop in temperature and precipitation all over the Earth. These changes were gradual.

22 Extinction of the Dinosaurs
The climate change caused by the drifting of the continents may have resulted in the extinction of the dinosaur. Many types of plants also became extinct. Dinosaurs that depended on these plants died. Meat-eating dinosaurs that depended on plant-eating dinosaurs died. Other scientists believe that dinosaurs became extinct as the result of a giant asteroid striking the Earth 65 million years ago.

24 Global Warming IN the mid-nineteenth century industrialization led to the increased burning of fossil fuels, including coal, oil and natural gas. Then these fuels are burned they release carbon dioxide that traps heat. As a result, the atmosphere becomes warmer. Meteorologists found that temperatures in the 1990’s were the highest in more than 100 years.

26 El Nino A cold current that flows from west to east across the southern part of the Pacific Ocean turns toward the equator along the coast of South America and flows north along the coast of Chile and Peru. It is known as the Peru Current. Occasionally the Peru Current is covered by a thin sheet of warm water. Every 2 to 10 years, strong winds spread the warm water over a large area resulting in droughts in some areas and flooding in others. 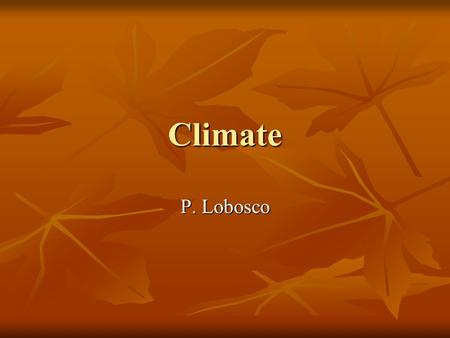