5 New Government 140 BC: Emperor Wudi (Woo-dee) took the throne
Wanted to create a strong central government Took land from the lords Raised taxes Placed the supply grain under the control of the government

6 Confucianism in the Han Dynasty
Made Confucianism China’s official government philosophy Officials were expected to practice Confucianism Began a university to teach Confucian ideas Exams were given on Confucian teachings If a person passed, he could get a good position in government. (Civil Service Exam) Exams were only open to people recommended for government service As a result, wealthy families continued to control government.

7 Family Life & Social Classes
Class structure became more rigid during the Han Dynasty Based on the Confucian system, people were divided into 4 classes.

9 Merchants were in the lowest class because they did not produce anything.
They only bought and sold what others made. Believed government officials should not handle or be concerned with money Military was not an official class in the Confucian system. It did however offer men the chance to rise in social status because the military was considered part of the government.

10 Lives of the Rich & Poor Classes only divided people into social rank.
Ranks did not indicate wealth or power. For example, merchants were ranked lowest but were usually the wealthiest. The wealthy lived lavishly in expensive homes while the poor lived in simple homes and wore plain clothing. Most people in the Han Dynasty were not wealthy. Out of the nearly 60 million, 90% of them were peasants.

12 Revival of the Family Since Confucianism was the official philosophy, teachings about family were honored. They believed in a concept called “Filial Piety” Respect Elders Disobeying parents was a crime Father was head of the family & had absolute power

13 Revival of the Family Han officials believed that if a family was strong and obeyed the father, then it would obey the emperor. Children were encouraged to serve their parents. They were also expected to honor dead parents with ceremonies and offerings. This was called Ancestor Worship. This is still practiced in parts of China today.

14 Boys vs Girls Chinese parents valued boys more highly than girls.
This was because the sons carried the family line and took care of their parents when they were old. On the other hand, daughters became part of their husband’s family. Some women gained power within their families by influencing their son’s family. An older widow could become the head of the family.

18 The Silk Road An overland trade route that extended from Western China to Southwest Asia. Stretched over 4,000 miles Silk was the most valuable trade product. Trip was expensive and extremely dangerous

20 Changes in China The Han Emperors after Han Wudi were weak and foolish. Central government lost respect and power Dishonest officials and greedy aristocrats led to unrest among farmers Wars, rebellion, and plots against the emperor led to the end of the Han Dynasty. People turned to Buddhism to cope with the fear and unrest. As a result, Buddhism spread throughout China. 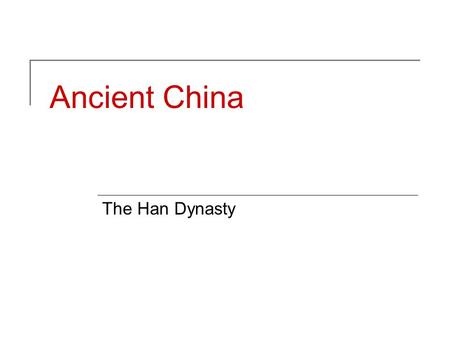 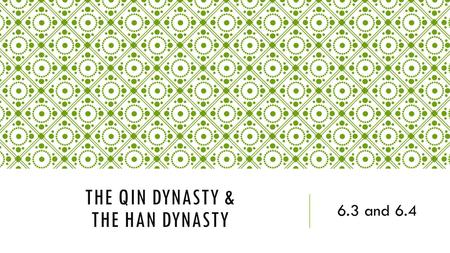 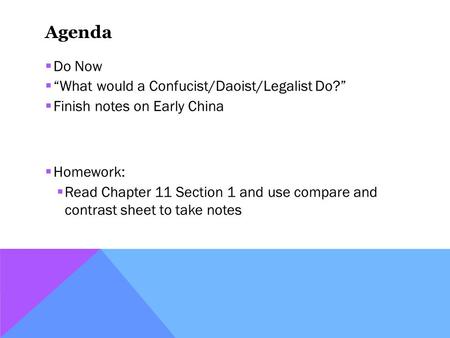