4 The Shang Dynasty  May have built first cities of China. A main city was Anyang in northern China. The Shang kings ruled from here and it was China’s first capitol city.  Divided by groups of power:  King and his family  Aristocrats- Nobles whose wealth came from the land they owned. (Warlords and military leaders)  Artisans  Farmers  Slaves

5  People in Shang China worshiped gods, spirits and honored their ancestors. They thought they had to keep the gods and spirits happy through offerings.  Shang kings were to contact gods, spirits and ancestors before making important decisions and used oracle bones.  Early Chinese used Pictographs- Characters that stand for objects and Ideographs (the joining of two or more pictographs to represent an idea)  Farmers produced silk which weavers used to make colorful clothes.  During the rule of Shang, a large gap existed between the rich and the poor and kings treated people cruelly. As a result they lost the support of the people and Wu Wang led a rebellion against Shang.

6 The Zhou Dynasty  Ruled for more than 800 years, longest in Chinese history.  Zhou kings headed the government and had a large Bureaucracy- Appointed officials who are responsible for different areas of government.  Zhou kings, they believed, linked Heaven and Earth.  Mandate of Heaven- States that the king was chosen by heavenly order because of his talent and virtue.  People expected king to rule according to the “dao” or way. –A natural disaster or bad harvest was a sign that he failed at his duty.  People had the right to overthrow a bad ruler and made clear that the king was not a god.  Zhou territories became powerful and began to battle each other. A ruler, Qin, used a large cavalry to defeat the other states and start a new dynasty.

9 Confucius  Known as Ancient China’s first greatest thinker and teacher.  He believed people needed to have a sense of duty and put the needs of family and community before their own.  The Golden Rule- “Do unto others as you would have others do unto you.”  Confucianism- All men with a talent for government should take part in government. (Unpopular idea among aristocrats)

10 Daoism & Legalism  Daoism promotes a peaceful society and is based on teachings of Laozi.  Ideas of Dao are written in Dao de Jing (The Way of the Dao). Daoists believed people should give up worldly desires and turn to nature and the Dao.  Daoism is the opposite of Confucianism. Daoism called for people to give up their concerns about the world and seek inner peace.  Legalism was known as the “School of Law”. Created by Hanfeizi, legalism taught that humans were naturally evil and needed harsh laws and stiff punishment.  Aristocrats liked legalism. It’s ideas led to cruel laws and punishments used to control the Chinese.

11 Section 3 The Qin and Han Dynasties

12 Emperor Qin  Qin Shihuangdi declared himself ruler in 221 B.C.  Qin based his rule on Legalism. Everyone who opposed him was punished or killed.  Qin created one currency and built roads and canals.  Qin began building the first walls of China.  People viewed Qin as a cruel leader and overthrew his dynasty after his death.

13 The Han Dynasty  Liu Bang founded the Han dynasty in 202 B.C.  Once a peasant, he became a military leader and defeated his rivals.  Under Han Wudi, the Han dynasty reached it’s peak. Wudi wanted talented people to fill government positions, so he required job seekers to take long difficult tests to qualify. Civil Service Examinations  Farmers could not tend all their land and sold their land to aristocrats and became tenant farmers.  China had many developments during the Han dynasty like the waterwheel, steel, paper and improved medicine.

14 The Silk Road  Han Wudi ordered a general named Zhang Qian to find allies west of China. He did not find allies but came across people from the Roman Empire and Kazakhstan.  This meeting started the Silk Road- A large network of trade routes stretching 4,000 miles from western China to southwest Asia.  People traded silk, spices, tea, and porcelain.  Merchants from India also brought ideas such as Buddhism to China. 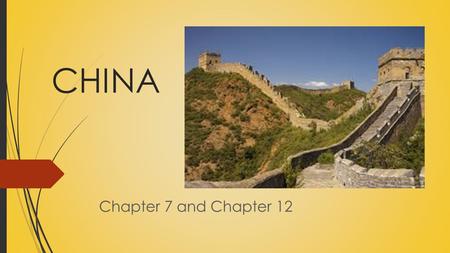