2 James I and the Origins of the English Civil War James was the son of Mary Queen of Scots and, because Elizabeth had no heir when she died, he became king. James was intelligent and educated, but had little common sense. He believed in the divine right of kings and did not allow Parliament to influence many policies.

3 James I He also supported the Anglican Church, which made conflict with the Puritans. Puritans were religious dissenters who wished to conform the Church of England. –James saw them as disloyal and warned them to conform or be forced out of the country. They eventually did leave in the 1620’s

4 James did agree to a new translation of the Bible, but that was his only reform in church doctrine under his rule.

5 Charles I Upon James’ death in 1625, he was unpopular with the English people. His son Charles I inherited this growing tension. Problems of Charles I –He asked for money to fight the war with Spain and was only given a fraction of what he requested.

6 Charles I (continued) –Immediately, he disbanded Parliament and tried to raise money from wealthy landowners. If they refused, Charles threw them in jail. Charles also demanded people allow the troops to board up in their homes. These policies were, obviously, controversial and Charles found himself in need of Parliament. He called them back into session in 1628.

7 Parliament forced Charles to sign The Petition of Rights in order to receive their cooperation in raising money. This document limited the power of the king.

9 Religious Problems With the Puritans Charles was advised by the leadership of the Church of England to persecute the Puritans. Thousands of Puritans moved to the North American Colonies in search of religious freedom. (1630-1643).

12 The English Civil War After 4 years of fighting, Charles I and his army surrendered in 1646 and Parliament was given control of the English Government. –Charles I was put on trial and sentenced to death in 1649.

14 The Return of the King In 1660, the Parliament reestablished the Monarchy; ideas of representative government and individual rights survived. This period when the English monarchy was restored is called the Restoration. The monarch who came to power was Charles II. Charles II restored theatre, sporting events, dance and other things the Puritans had banned.

15 Charles II During the reign of Charles II, parliament passed an important guarantee of freedom, habeas corpus. This law gave every prisoner the right to be brought before a judge (monarch could no longer just throw someone in jail)

16 The End of the Stuarts In 1685, James II became king after his brother Charles II died. –He wanted to be an absolute King, as well, and claimed that he had the right to ignore all the laws of Parliament. He also flaunted his Catholicism. –Obviously, this angered Parliament. They invited his daughter Mary of Orange and her husband William to take the throne

17 The End of the Stuarts James II fled to exile in France when William arrived with a Dutch Army in 1688. William and Mary were named joined rulers of England by Parliament. This bloodless transfer of power in England is known as the Glorious Revolution.

18 Glorious Revolution Before William and Mary were allowed to take the throne, they had to swear an oath to govern England “according to the laws of Parliament and the customs of England.” –Parliament also passed the English Bill of Rights, which was a series of individual rights guaranteed to citizens. 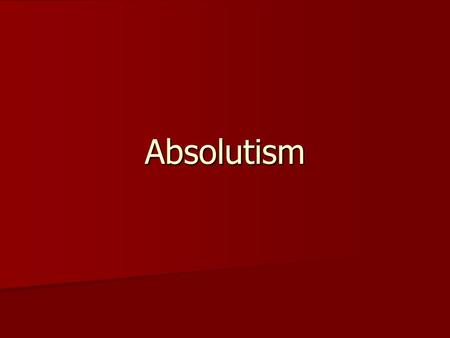