Presentation on theme: " Attended by Roosevelt, Churchill and Stalin. 1. Creation of the United Nations. 2. Stalin agrees to enter the Pacific war after the defeat of Germany."— Presentation transcript:

2  Attended by Roosevelt, Churchill and Stalin. 1. Creation of the United Nations. 2. Stalin agrees to enter the Pacific war after the defeat of Germany. 3. Stalin agreed to “free” elections in all Eastern European countries that were now under the control of the Soviet Union after the war.

4  Truman, Atlee and Stalin meet in Germany. 1. Stalin now refuses to allow free elections in Eastern European nations and also bans Democratic political parties. 2. Stalin also wants to strip Germany of its industrial equipment in order to rebuild the Soviet Union. 3. Stalin felt he had the right to install puppet communist governments in Albania, Romania, Poland, Czechoslovakia, Bulgaria and Hungary because of the enormous loss of Russian life due to Hitler.

5  SATELLITE NATIONS – Countries dependent upon and dominated by the Soviet Union.  CONTAINMENT – 1946 American political policy which will attempt to block the Soviet’s attempt to spread their influence by creating alliances and supporting weaker countries.

6 1946 – Joseph Stalin begins transferring all industrial assets from Eastern European Satellites to the Soviet Union. “Capitalism and Communism are incompatible and another World War is inevitable!” The Soviet Union will now begin focusing on producing Weapons rather than Consumer Goods.

7  The U.S. and Great Britain both fear a Communist takeover in Greece and Turkey.  Truman asks Congress for $400 million in economic and military aid for these countries.  March 12, 1947 – Truman declares that the, “United States should support free peoples throughout the world who were resisting takeovers by armed minorities or outside pressures”.

8 Take a few minutes to reflect on the Truman Doctrine. Also think about what was happening in the world around us in 1947. Please take a position as to whether the Truman Doctrine was a positive or negative policy for the United States of America. How can such a policy get us in trouble as a nation?

10  George Marshall – U.S. Secretary of State.  Proposes that the United States provide aid to ALL European countries that needed it.  This move was not for Capitalism or Communism but rather against poverty, hunger, desperation and chaos.  After the Soviet tanks rolled into Czechoslovakia, Congress unanimously agreed to move $12.5 billion to Western European countries.

12  In 1948 the city of Berlin was divided between the democratic governments and the Soviet government.  The Soviets made a bold move and cut off all supplies, food and water to West Berlin. 2.1 million people would eventually starve.  American and British military began to airlift food and supplies to the people of West Berlin for the next 327 days.  The Soviets looked like horrible people and the Americans were made to look like heroes. The Soviets gave up the blockade in May of 1949.

14  After the Berlin Airlift, the strongest nations in western Europe and North America came together in a treaty.  United States, Great Britain, Canada, Belgium, Denmark, France, Iceland, Italy, Luxembourg, Netherlands, Norway and Portugal.  An attack on one would be an attack on all. The U.S. for the first time entered into a treaty and the world of Isolationism was over.

Download ppt " Attended by Roosevelt, Churchill and Stalin. 1. Creation of the United Nations. 2. Stalin agrees to enter the Pacific war after the defeat of Germany." 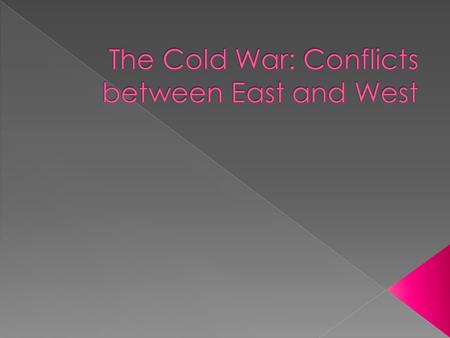 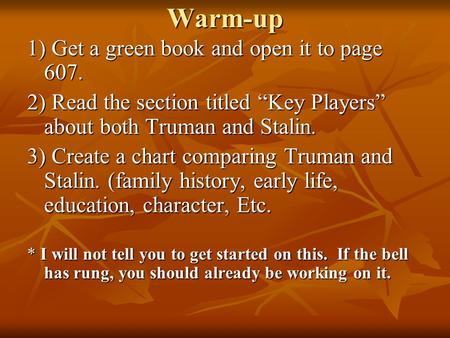 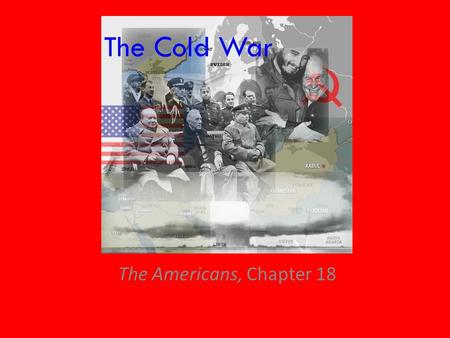 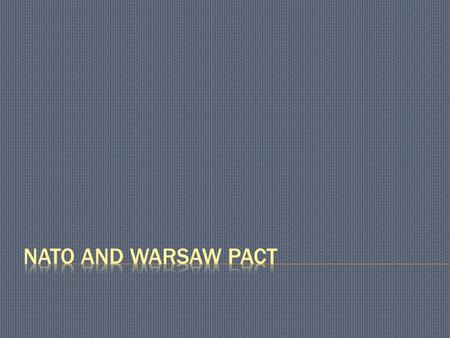