1 THE BEGINNINGS OF THE COLD WAR

2 Disagreements over control of Europe and the development of nuclear weapons caused the alliance between the U.S. and the Soviet Union to fall apart. This began a period called the Cold War ( )

5 The Soviets believed that communism was a superior economic system and that it would eventually replace capitalism throughout the world.

8 Declaration of Liberated Europe – people have the right to choose the government under which they will live and to create democratic institutions of their own choosing.

9 At the end of World War II, Germany was divided into four zones controlled by the Allies.
Britain, France, and the U.S. controlled “West Germany”, the U.S.S.R. controlled “East Germany”.

10 As Germany was divided into four zones, so was Berlin.

11 Disagreements over what to do with Germany after the war added to Cold War tensions. Before the war was over, it was evident that the Soviets were not going to allow democratic governments to be established in Eastern Europe.

14 Potsdam Conference – Truman insisted on fewer industrial reparations against Germany. He informed Stalin of the successful test of an atomic bomb. Stalin had to agree to Allies wishes for rebuilding the German economy.

16 Soviet occupation of Eastern Europe ensured that pro-Soviet governments would be in place in Poland, Romania, Bulgaria, Hungary and Czechoslovakia. These nations became known as “satellite nations” – not part of USSR, but friendly to Soviet policies.

19 The Soviets believed that communism and capitalism would always struggle against each other and that communism would eventually take over as the superior system. This did not allow for much cooperation between the US and USSR.

20 The U.S. policy on Communism became containment – keeping communism within its present borders through diplomatic, economic and military actions.

24 Disagreement over Germany and war reparations led Britain, France and the U.S. to combine their sections of Germany to create West Germany. The Soviets still controlled East Germany.

30 Americans and western allies were convinced that the Soviets were bent on conquest. April 1949 – an agreement for mutual defense with western Europe led to NATO.

32 The world became split between “The East” and “The West”. 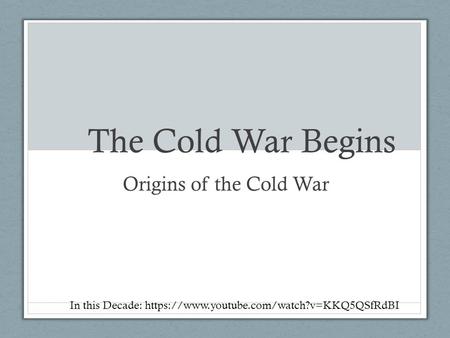