2 All roads lead to Rome!

7 The Seven Hills of Rome

13 Etruscan Monarchy First Etruscan King was Romulus
Etruscans expanded power and took control over Romans Last Etruscan King was Tarquin the Proud expelled by a popular rebellion in 509 BCE Romans did not want to be ruled by kings anymore Paved way for Rome to create a Republic First King was Romulus = based on ancient myth (raised at Palatine aka Seven Hills of Rome and future residence of emperors) -high magistrates of Roman Republic used purple robes and ivory thornes of Etruscan kings (lucumones) -symbol of authority over life an death called fasces (axe bound into a bundle of wooden rods; when magistrates were present, it was carried by an escort of officials known as lictors -Tarquin the Proud= expelled by a popular rebellion in 509 BCE -rebellion had been sparked bc the king’s son Sextus raped a virtuous aristocratic woman named Lucretia, who consequently committed suicide. -

15 Government in Action What makes a successful leader?
Scenario: You are a member of the Senate in ancient Rome. Soon you must decide to support or oppose a powerful leader who wants to become ruler. Many consider him a military genius for having gained territory and wealth for Rome. Others point out that he disobeyed orders and is both ruthless and devious. You wonder whether his ambition would lead to greater prosperity and order in the empire or to injustice and unrest.

16 Warm- Up: Discussion Questions ???
Which is more important in measuring leadership- results or a person’s integrity?? What do you value in an leader ? Does a leader have to be likable in order to succeed??

17 The Origins of Rome: Review!
Rome’s Geography Site of Rome chosen for its fertile soil and strategic location Located on Italian Peninsula in the center of the Mediterranean Sea. Built on seven hills along Tiber River The First Romans Latins, Greeks, and Etruscans compete for control of the region. Latins found original settlement of Rome between 1000 B.C. and 500 B.C. Etruscans native to northern Italy influence Roman civilization ***What factors of Geography influenced Rome’s Development? ***

19 The Early Republic Patricians and Plebeians
Different groups struggle for power in early Roman Republic Patricians—wealthy landowning class that holds most of the power Plebeians—artisans, merchants and farmers; can vote, but cannot rule Tribunes—elected representatives who protect Plebeians’ rights

20 The Early Republic Government Under the Republic
Rome elects two consuls—one to lead the army and one to direct government. Senate—chosen from Roman upper class; makes foreign and domestic policy. Democratic assemblies elect tribunes and makes laws for common people. Dictators are leaders appointed briefly in times of crisis, usually on of the consuls

24 The Early Republic Twelve Tables
In 451 B.C. officials carve Roman laws on twelve tablets. Called the Twelve Tables, they become the basis for later Roman law. Laws confirm the right of all free citizens to the protection of the law. Citizenship is limited to adult male landowners. The Twelve Tables are hung in the Forum

25 Silly Laws? Comparative Laws
Any examples of laws that you can think of that could be considered awkward ? Either in history or current? Let us take a look at some laws found in the Twelve Tables together. . .

26 The Early Republic The Roman Army
Roman legion—military unit of 5,000 infantry, supported by cavalry. Army is powerful and a key factor in Rome’s rise to greatness.

27 Rome Spreads Its Power Rome Conquers Italy
The Romans defeat the Etruscans in the north and the Greek city-states in the south. By 265 B.C., Rome controls the entire Italian peninsula. Rome treats the conquered peoples justly. This enables Rome to grow.

30 Hannibal crossing the Alps in the Second Punic War

31 Attempts at Reform & Stability Section 2
The widening gap between the rich and poor was starting to become a constant issue Due to new wealth from the expanding Roman Empire ( page 135) Farmers went into debt The Gracchus brothers were slain in the streets Distribute land to poor farmers (Page 135) Republic unable to resolve issues peacefully Result: A century of civil war Turmoil: slaves & allies

34 Early life:FYI Born a patrician family in 100 B.C.
As a child, he would claim he was a descendent of the goddess Venus Caesar’s father suddenly died and at age 16, Caesar became the head of the household As a young man, Caesar was nominated for many important positions such as the Flamen Dialis (High Priest of Jupiter) He later joined the army, where he served with distinction. He was later elected as military tribune and served in Hispania (modern day Spain).

35 Rise to power While in Hispania, Caesar (age 30) came across a statue of Alexander the Great and wept, for Alexander had conquered most of the known world by the same age and Caesar had accomplished so little. 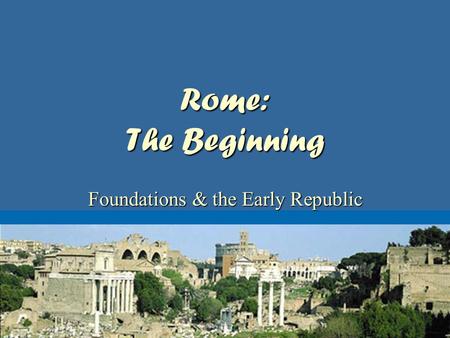