2 Definition of Poetry The art of rhythmical composition, written or spoken, for exciting pleasure by beautiful, imaginative, or elevated thoughts Literary work in metrical form; verse Prose with poetic qualities

3 Definition of Prose The ordinary form or spoken or written language, without metrical structure, as distinguished from poetry or verse Matter-of-fact, commonplace, or dull expression, quality, discourse, etc.

4 Poetic Devices Allegory - a representation of abstract ideas or principles by characters, figures, or events in a narrative, dramatic, or pictorial form and can often be an extended metaphor for a specific historical or political event.

5 Poetic Devices Connotation - The set of associations implied by a word in addition to its literal meaning. Denotation - The literal dictionary meaning(s) of a word as distinct from an associated idea or connotation.

6 Poetic Devices Extended Metaphor - A metaphor which is drawn out beyond the usual word or phrase to extend throughout a stanza or an entire poem, usually by using multiple comparisons between the unlike objects or ideas. Figurative - The use of words, phrases, symbols, and ideas in such a way as to evoke mental images and sense impressions.

7 Poetic Devices Imagery - The use of expressive or evocative images in poetry, art, literature, or music. Metaphor - Direct comparison between two or more seemingly unrelated subjects allowing emotions and associations from one context to be associated with objects and entities in a different context.

8 Poetic Devices Persona - The speaker or voice of a literary work who is doing the talking, the persona is the implied speaker of the poem. Symbol - A graphical, written, vocal, or physical object with represents another, usually more complex, physical or abstract object.

9 Poetic Devices Syntax - The way in which linguistic elements (words and phrases) are arranged to form grammatical structure. Tension - The artistically satisfying equilibrium of opposing forces in a poem, usually referring to the use of language and imagery, but often applied to other elements, such as dramatic structure, rhythmic patterns, etc.

10 Poetic Devices Theme - The central idea, topic, or didactic quality of a work. Tone - The poet’s or persona’s attitude in style or expression toward the subject. Tone can also refer to the overall mood of the poem itself when the overall atmosphere of the poem is intended to influence the reader’s emotional response.

12 Sound Devices End Rhyme - A rhyme in the final syllables of a verse.
End-Stopped - A feature in poetry where the syntactic unit (phrase, clause, or sentence) corresponds in length to the line. Enjambment - The breaking of a syntactic unit by the end of a line or between two versus.

14 Sound Devices Rhyme Scheme - The pattern established by the arrangement of rhymes in a stanza or poem. Rhythm - The regular or progressive of recurrent accents in the flow of a poem, the rise and fall of stresses on words in the metrical feet.

15 Sound Devices Slant Rhyme - Sometimes known as half or off rhyme, a rhyme in which the sounds are similar, but not exact, often using consonance or assonance. 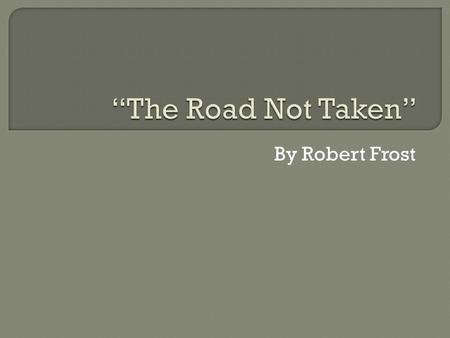 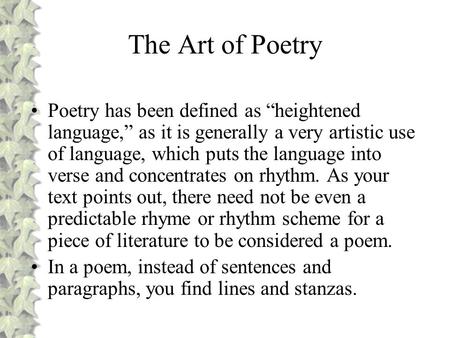 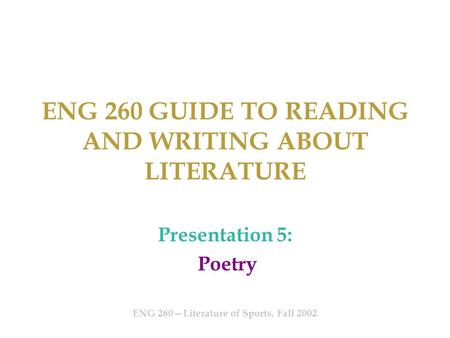