Long, long ago in a galaxy far, far away (room 5-1), a group of fifth graders (that’s you!) were learning about space…

Presentation on theme: "Long, long ago in a galaxy far, far away (room 5-1), a group of fifth graders (that’s you!) were learning about space…"— Presentation transcript:

1 Long, long ago in a galaxy far, far away (room 5-1), a group of fifth graders (that’s you!) were learning about space…

3 What is a solar system? A system of planets, moons, comets, asteroids, dust, gases, and anything else that orbit a star and are tied to its gravitational force The sun (a yellow star) is the center of our solar system

4 Previously in the study of space… Around 200 BC –Aristarchus (Greek) –Sun was the center Ptolemy –Greece, early 100s –The earth was the center of the universe

7 Modern Model of the Solar System

8 Planets AKA major planets A body that revolves around the sun Gravity keeps them in orbit Shine because they reflect light from the sun Mercury, Venus, Earth, Mars, Jupiter, Saturn, Uranus, Neptune –Many Very Entertaining Monkeys Just Stay Up Nights

12 Mercury Special characteristics: –Smallest planet –Moon-like surface –Dry, hot, airless (no atmosphere) –Oldest surface –Least explored –Sun’s rays are 7 times as strong as they are on Earth –Travels at a speed of 104,000 mph –Named for the Roman god of trade and profit

19 Mars North is at the center, south is at both ends

24 Saturn continued Special characteristics: –First viewed through a telescope by Galileo in 1610 –Made of hydrogen, helium and methane –No solid surface –Pressure makes gas into liquid –Yellow and white clouds –“Jewel” of our solar system – 6 major rings –Speed of wind at equator: 1,100 mph –Named for the Roman god of agriculture

28 Neptune continued Special characteristics: –Blue color from methane gas –Located through math, rather than observation –Incredible pressure –May have a super hot ocean –Winds: 1,200 mph –Named for the Roman god of the sea –Invisible to naked eye –6 rings

Download ppt "Long, long ago in a galaxy far, far away (room 5-1), a group of fifth graders (that’s you!) were learning about space…" 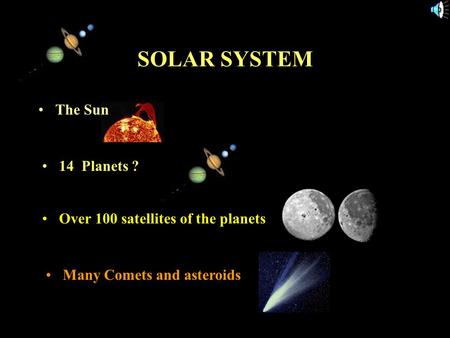 11/15/99Norm Herr (sample file) SOLAR SYSTEM The Sun 14 Planets ? Over 100 satellites of the planets Many Comets and asteroids. 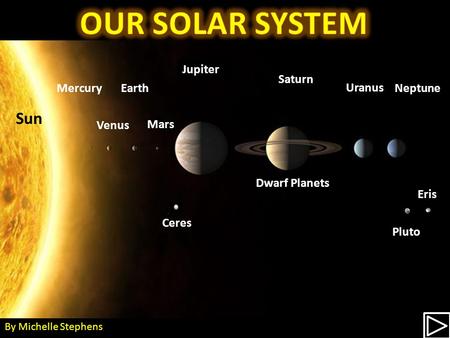 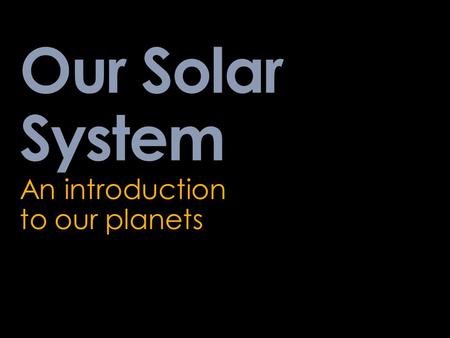 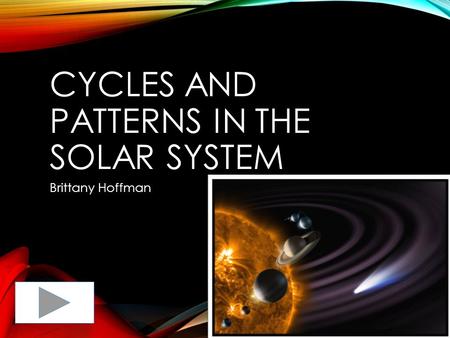 CYCLES AND PATTERNS IN THE SOLAR SYSTEM Brittany Hoffman.