2 OUR SUN  Our Sun is the center of the Solar System.  The Sun’s diameter is more than 1,000,000 kilometers.  It is the source of energy on Earth, and without it life could not exists.

3 Mercury  Mercury is a small, rocky planet.  It is covered with many craters.  The planet is about the size of Earth’s moon.

4 Venus  Venus is the second planet from the sun.  The planet is also the brightest planet in the solar system.  Venus is the third brightest object in Earth’s sky. Only the sun and moon appear brighter.

5 Earth  Earth is the third planet from the sun.  This planet is the fifth largest.  It’s the only planet known to have life and the only planet whose surface is mostly water.

6 Mars  The nickname Mars has is the red planet.  Mars has huge dust storms that can last for months.  Scientists think that at one time Mars may have had water on the planet.

7 THE ASTEROID BELT  The asteroid belt is located between the planets Mars and Jupiter.  More than 7,000 asteroids have been discovered in the asteroid belt. Several hundred more are being discovered each year.

8 Jupiter  This planet is the largest planet in the solar system.  Jupiter has at least 63 moons.  For more than 300 years, a gigantic hurricane- like storm called the Great Red Spot has raged on Jupiter.

9 Saturn  Saturn has rings that are visible from Earth through a telescope.  Its atmosphere is mostly hydrogen and helium.  Saturn has at least 31 moons.

10 Uranus  Uranus rotates on its side as it orbits the sun.  The planet has at least 27 moons.  Uranus is one of the gas giants.

11 Neptune  Neptune’s atmosphere is mainly made of hydrogen and helium.  It is one of the windiest planets in the solar system.

12 The Dwarf Planet Pluto  Tiny Pluto has a rocky surface covered with nitrogen, ice, and small amounts of methane and carbon dioxide ices.  From the surface of Pluto, the sun looks like another bright star in the sky.  Pluto’s moon is about the same size as Pluto itself.

13 The Galaxy  A galaxy is a huge system of gases, dust, and stars.  Galaxies contain billions of stars. Our sun is on the edge of the Milky Way galaxy.

14 Comets  A comet is a ball of rock, ice, and frozen gases.  As a comet’s orbit brings it close to the sun, the sun’s heat may turn some of the frozen matter into gas.

15 The Universe  The universe is everything that exists in space.  There are many different galaxies in the universe.

17 Telescope  A telescope is an instrument that is used to better view the sky.  The first telescopes were all refracting telescopes.

19 Other Stars  Here are the names of some other stars, Procyon, Sirius, Barnard’s Star, Alpha Centauri, and Ross 154.  The 3 closest stars to our solar system make up the star Alpha Centauri. 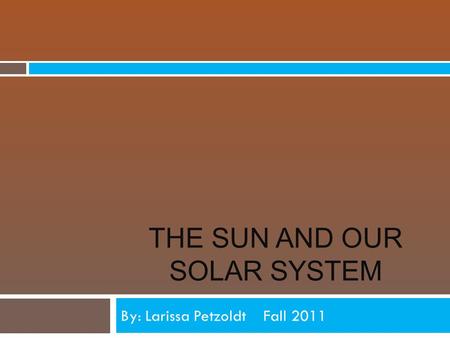 THE SUN AND OUR SOLAR SYSTEM By: Larissa Petzoldt Fall 2011.