3 Comparison: EU vs. US Land area Population
European Union is less than half the size of the United States Population European Union has 516 million residents GDP (purchasing power parity) US$13 trillion EU exports more but imports less than US

6 Outline How and why did the EU emerge?
What are its main decision-making bodies? Progress of European integration bursts of growth broadening (add new members) deepening (add new powers) stagnation, doubts, and criticisms

10 Merge of 3 communities (1967)
1967, executives of ECSC, EURATOM, and EEC were merged one single Commission one single Council of Ministers European Parliament members chosen by national parliaments directly elected every 5 years since 1979

14 Single Currency Economic and Monetary Union (EMU)
exchange rate stability interest rates, the budget deficit, the inflation rate, and the debt-to-GDP ratio When the euro was launched in 1999, the European Central Bank (ECB) took over full responsibility for monetary policy throughout the euro area

15 Monetary Union: Stage III
European Central Bank be set up exchange rates between participating currencies be fixed once and for all single currency be introduced for the administrations and the banks coins and notes of the single currency be in circulation on January 1, 2002 at the latest

18 Introduction of the Euro

19 EU enlargement Three main criteria that countries have to meet before being eligible to begin negotiations to join the EU (1997) establishment of a functioning and stable democratic regime market-oriented capitalist economy acceptance of the 80,000 pages of laws and regulations already on the EU’s books 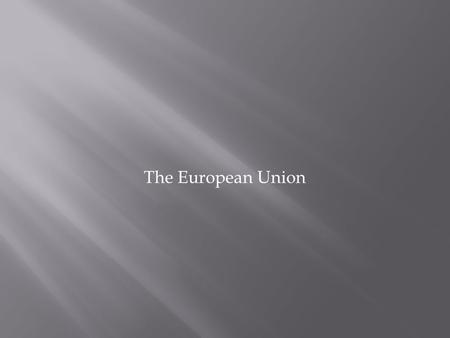