3 Understanding HIV/AIDS
Virus and cannot live outside the human body Cannot be spread through airborne transmission, through casual contact such as shaking hands or hugging, or from insect bites HIV is transmitted among humans only when one person’s infected blood, semen, or vaginal secretions comes in contact with another person’s broke skin or mucous membrane Mucous Membranes are found in: Mouth, eyes, nose, vagina, rectum, opening of the penis HIV can be spread three ways: During sexual intercourse By sharing needles From mother to baby

5 AIDS opportunistic illness
When HIV enters certain cells, it reproduces itself and eventually destroys the cell As more cells are destroyed the immune system becomes weaker and weaker AIDS opportunistic illness Infections the body could fight off if the immune system were healthy HIV infection goes through identifiable stages before progressing to AIDS Asymptomatic stage: take over the lymph nodes, no outward signs, can last for 10 years Middle stage: occurs in about percent of patients; experience fever, headaches, sore throat, rash, diarrhea, and enlarged lymph nodes Symptomatic stage: helper T cells fall to 200 to 400per milliliter of blood, have flu like symptoms as well as weight loss and skin rashes AIDS stage: helper T cells fall below 200, more AIDS opportunistic illnesses are present

7 Preventing HIV/AIDS Helpful behaviors include: Practice abstinence
Do not share needles Avoid situations where drug and alcohol use might compromise your decision making Use refusal skills when you feel pressures to engage in risky behaviors

8 Diagnosing HIV/AIDS Types of Laboratory HIV tests: EIA Test
A test that screens for the presence of HIV antibodies in the blood Western Blot Test A test that detects HIV antibodies and confirms the results of earlier EIA tests RNA and CD4: may be run when the western blot test comes back positive RNA: viral load test, shows how many copies of the virus are circulating in the blood CD4: looks at the number of white blood cells in a sample of blood Rapid Test An HIV test that produces results in only 20 minutes 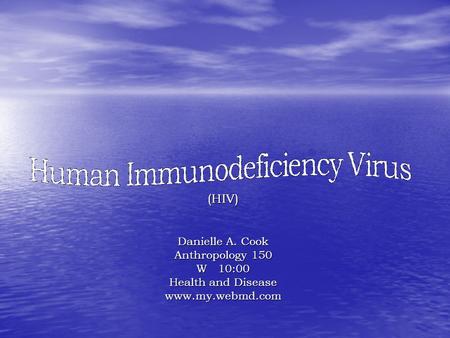