2 Statistics Almost half of all pregnancies in the United States are unplanned. There are many safe and highly effective methods of contraception (birth control) available to prevent unintended pregnancy. In the United States, most women of reproductive age use birth control. Between 2006–2008, 99% of women who had ever had sexual intercourse had used at least one method of birth control.

4 Intra Uterine Device IUD
Copper IUD: Small device that is shaped in the form of a “T.” Doctor places it inside the uterus to prevent pregnancy. It can stay in your uterus for up to 10 years. 99% effective at preventing pregnancy.

5 The Pill The Pill Contains the hormones estrogen and progestin.
Prescribed by a doctor. Taken at the same time each day. The pill is 92–99% effective at preventing pregnancy.

6 Patch The Patch Worn on the lower abdomen, buttocks, or upper body (but not on the breasts). You put on a new patch once a week for three weeks. During the fourth week, you do not wear a patch, so you can have a menstrual period. Prescribed by a doctor. Releases hormones progestin and estrogen into the bloodstream. 92–99% effective at preventing pregnancy, but it appears to be less effective in women who weigh more than 198 pounds.

7 Hormonal Vaginal Contraceptive Ring
The Ring Releases the hormones progestin and estrogen. Place the ring inside your vagina. You wear the ring for three weeks, take it out for the week you have your period, and then put in a new ring. 92–99% effective at preventing pregnancy.

9 Implant The Implant Single, thin rod that is inserted under the skin of a women’s upper arm. Contains progestin that is released into the body over 3 years. 99% effective at preventing pregnancy.

11 Female Condom Female Condom Worn by the woman.
Helps keeps sperm from getting into her body. Packaged with a lubricant and is available at drug stores. Can be inserted up to eight hours before sexual intercourse. 79–95% effective at preventing pregnancy when used consistently and correctly, and may also help prevent STDs.

12 Diaphragm or Cervical Cap
Placed inside the vagina to cover the cervix to block sperm. Diaphragm is shaped like a shallow cup. Cervical cap is a thimble-shaped cup. Insert before sexual intercourse them with spermicide to block or kill sperm. Diaphragm is 84–94% effective at preventing pregnancy. Visit your doctor for a proper fitting because diaphragms and cervical caps come in different sizes.

13 Spermicides Spermicides
Work by killing sperm and come in several forms—foam, gel, cream, film, suppository, or tablet. Placed in the vagina no more than one hour before intercourse. You leave them in place at least six to eight hours after intercourse. Can use a spermicide in addition to a male condom, diaphragm, or cervical cap. 71–82% effective at preventing pregnancy.

14 Withdrawal Withdrawal or “Pull Out Method”
Male partner remove his penis before he ejaculates. Ejaculation occurs outside the vagina reducing the likelihood that semen will reach the uterus. 18-19% effective at preventing pregnancy

15 Female Sterilization: Tubal Ligation
A woman can have her fallopian tubes tied (or closed) so that sperm and eggs cannot meet for fertilization. Can be done in a hospital or in an outpatient surgical center. You can go home the same day of the surgery and resume your normal activities within a few days. This method is effective immediately.

16 Male Sterilization: Vasectomy
Done to keep a man’s sperm from going to his penis, so his ejaculate never has any sperm in it that can fertilize an egg. This operation is simpler than tying a woman’s tubes. The procedure is done at an outpatient surgical center. The man can go home the same day. Recovery time is less than one week. After the operation, a man visits his doctor for tests to count his sperm and to make sure the sperm count has dropped to zero; this takes about 12 weeks. Another form of birth control should be used until the man’s sperm count has dropped to zero.

19 Natural Family Planning or Fertility Awareness
Understanding your monthly fertility patter can help you plan to get pregnant or avoid getting pregnant. Your fertility pattern is the number of days in the month when you are fertile (able to get pregnant), days when you are infertile, and days when fertility is unlikely, but possible. If you have a regular menstrual cycle, you have about nine or more fertile days each month. If you do not want to get pregnant, you do not have sex on the days you are fertile, or you use a form of birth control on those days. 75–99% effective at preventing pregnancy.

20 Abstinence Abstinence
This method means not having vaginal intercourse at any time. The only 100% effective way to prevent pregnancy. 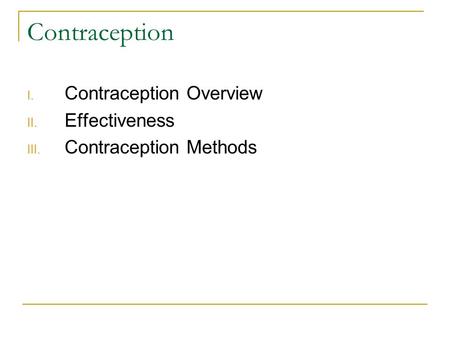 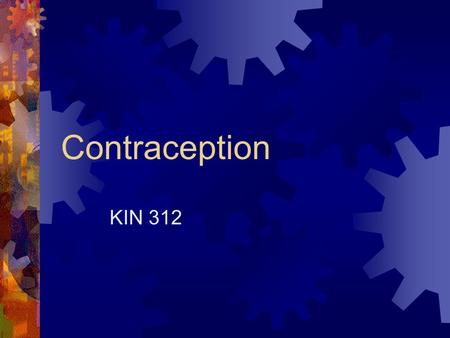 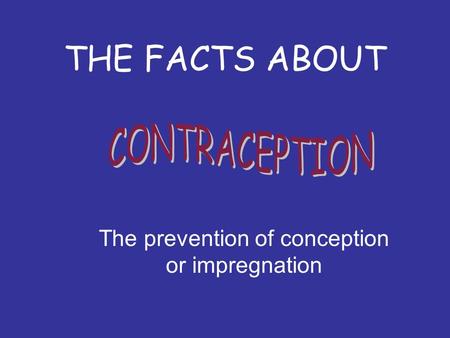 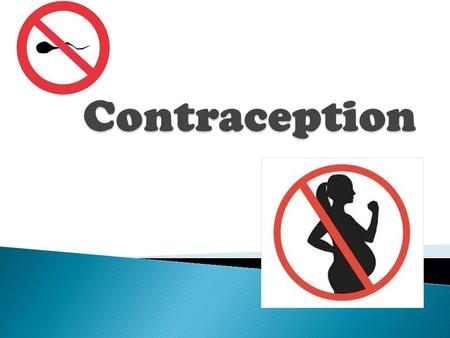