Presentation on theme: "Opener - Baroque Artist Quiz (on your own paper)"— Presentation transcript:

1 Opener - Baroque Artist Quiz (on your own paper)
Name the four things that identify something as “Baroque” artwork. Name the artist who created the statue, Ecstasy of Saint Teresa. Rembrandt was known for always using what color in his paintings? T or F, Caravaggio was an upstanding citizen in Roman who never got into trouble with the law. Identify the time period that came before the Baroque Period.

3 VOCABULARY Counterpoint:
Type of compositional technique in which two melodies combine to create the harmony, instead of one harmony and chords to accompany it. 3

4 VOCABULARY Fugue: A form of composition in which a theme or subject is introduced by one voice, and is imitated by other voices in succession. Usually only the first few notes of the subject are imitated exactly, then each voice deviates slightly until the next time it enters again with the subject. Generally the instruments or voices overlap and weave in and out of each other forming a continuous, tapestry-like texture. 4

5 VOCABULARY Improvisation:
spontaneous performance of music without previous preparation or written notes. Improvisation can be seen in music of the Baroque era, where ornamentation and realization of figured bass was common. 5

6 VOCABULARY banana? Figured bass: (basso continuo)
The bass part -generally of a Baroque composition- that is marked so as to indicate the harmonies that should go with each note. banana? The bottom staff shows the figured bass, the Grand Staff above shows what the musician could play! 6

7 VOCABULARY Ornamentation:
Decorative notes of short duration added to compositions to emphasize certain notes and to add flavor to the composition. Ornamentation is particularly prominent in the music of the Baroque era and is not limited to specific instruments, but may be performed on almost any instrument, including the voice. 7

8 VOCABULARY Genre: Style, manner
Oratorio: Large scale dramatic composition with text usually based on religious subjects. Oratorios are performed by choruses and solo voices with an instrumental accompaniment, and are similar to operas but without costumes, scenery and actions. (cheaper!) The genre originated in the 17th century (Renaissance period) and developed to its peak during the Baroque period. 8

10 Concerto: small group of instruments plays in concert, or conflict, with a larger orchestra Cantata: choral work for Lutheran worship Ritornello: something that returns or is repeated

12 George Frideric Handel 1685-1759 the “Father of the Oratorio”
Born in Halle, Germany. His father wanted him to be a lawyer so he forbade him from having instruments at home. When he was seven he went to his dad to Weissenfels where he played the chapel organ. His playing was so impressive the duke insisted that he be allowed to study music. Handel soon became a virtuoso on the organ. By the time he was eleven he could play the harpsichord, oboe, organ, and violin (all technically difficult instruments). He had already composed six sonatas and he was the assistant organist at Halle Cathedral. 12

13 George Frideric Handel 1685-1759 the “Father of the Oratorio”
In 1702 he entered the university to study law while continuing with his organist job, he quit a year later and moved to Hamburg, Germany’s operatic center. He worked as a violinist and by 1707 he had composed his first opera. His operas brought him success in Germany, Italy and England. His operas were so loved in England that the Queen asked him to stay there. He wrote Ode for the Birthday of Queen Anne, for which the Queen gave him an annual salary. When King George came into power Handel composed Water Music for a festival. The King liked it so much that he gave Handel a yearly salary for the rest of his life. Handel began writing oratorios when he was 53(his later operas were not as successful as the first), he became the greatest oratorio composer ever. His most famous work is Messiah, an oratorio covering all of Jesus' life, death and Resurrection. He was already a British citizen when he died and was buried in England’s most sacred place, Westminster Abbey. 13

14 Messiah So even if you had not heard about oratorios before, some/most/a few of you had heard part of an oratorio… Hallelujah Chorus, from Messiah, by George Frideric Handel. Handel was called the “Father” of the oratorio. He was very successful writing oratorios during his lifetime and they continue to be very popular and influential today. His most famous work is Messiah; it is performed every year usually at Christmas, but the second half deals with the death and resurrection of Christ so it is often performed at Easter as well. It contains pieces for the orchestra alone (e.g. overture), for soloists -Soprano, Contralto, Tenor, Bass (arias, duets), for choir (e.g. Hallelujah Chorus), and for combinations of the three. (play) The instrumental sections include many solos for instrumentalists to show off their virtuosity. The singers are expected to use ornaments at the appropriate time and use them in a way that they represent and enhance the text. It is tradition that whenever the Hallelujah Chorus is sung the audience stands 14

15 Johann Sebastian Bach 1685-1750 High point of Baroque Music German
From a family of musicians (reunions?) Masterpieces in every form except opera Toccata and Fugue in D minor (Bach- 250 if time)

18 Antonio Vivaldi 1678-1741 developed the Concerto
Born in Venice, Italy. He was ordained a priest and soon after began working at the Ospedale della Pietà, where he held positions for most of his life. This was an orphanage for girls where Vivaldi developed an orchestra and vocal program that became famous all over Europe. A lot of his music was premiered there to the acclaim of critics and audiences alike. He wrote in many genres including opera, oratorio, sonata, and mass pieces, but his concertos are what make him important in history. He was a virtuoso violinist and his concertos raised the standards for violin performance to a higher level. His most famous concertos are a group called The Four Seasons. 18

19 Exit Slip Which composer was known for being from a family of musicians? Vivaldi originally composed difficult music for which instrument? This is like an Opera but is cheaper and has no acting. What is the “complete art form?” Identify the name and composer of one song you listened to today.

Download ppt "Opener - Baroque Artist Quiz (on your own paper)" 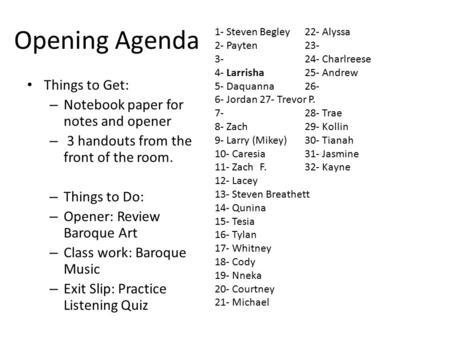 Opening Agenda Things to Get: – Notebook paper for notes and opener – 3 handouts from the front of the room. – Things to Do: – Opener: Review Baroque Art.