1 Heat & Wind by: Mrs. Wisher WRITE EVERYTHING IN BLUE!

6 Winds Wind is the horizontal movement of air Winds are caused by the unequal heating of the atmosphere Winds will travel from an area of high pressure to low pressure http://hint.fm/wind/

11 Global Winds Winds that blow steadily from specific directions over long distances. The sun hits the equator at a straight angle so it heats the surface stronger. The sun’s rays hit the poles at an angle which spreads the heat so it is cooler. The movement of air between the equator and the poles produces global winds.

16 Jet Stream High-speed winds about 10 km above the surface Winds can blow west to east 200-400 km per hour How does this affect transcontinental air travel? 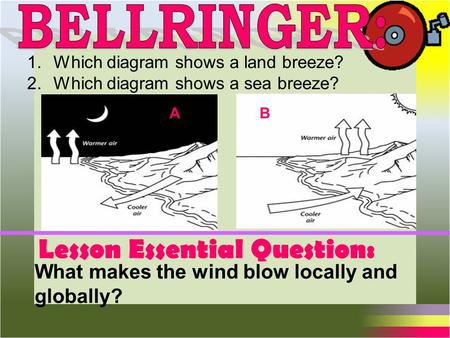