2 Weather Weather is the term used to describe the conditions that exist in a certain place for a short time.

3 The Force Behind Weather
The Sun provides the energy that forms weather. Solar energy heats the equator more than the poles.

4 The Force Behind Weather
As land or the ocean warms, it heats the air next to it and this air begins rising. As the heated air rises, air from elsewhere flows in to replace it. What is this type of heat transfer called?

6 What causes winds? Wind is a horizontal movement of air from an area of high pressure to an area of low pressure It is this difference in pressure that makes the air move=wind Winds are measured by direction and speed Wind speed is measured with an anemometer.

13 Coriolis Effect Because Earth is rotating, global winds do not follow a straight path. As the winds move, Earth rotates from west to east underneath them, making it seem as if the winds have curved. This is called the Coriolis effect. Northern Hemisphere- winds turn toward right. Southern Hemisphere, winds curve toward left.

14 Global Wind Belts Doldrums
Regions near the equator with little or no wind. Horse Latitudes   belt of calm air at about 30° north and south latitudes where the air stops moving toward the poles and sinks The Coriolis effect and other factors combine to produce a pattern of calm areas and wind belts around Earth

17 Air Masses huge body of air that has similar temperature, humidity, and air pressure throughout it has the same characteristics of the surface over which it develops Classified by Humidity—Continental (dry) or Maritime (humid) Temperature—Tropical (warm, low pressure) or Polar (cold, high pressure) generally move west to east in N. America

22 Occluded Front 2 cold air masses merge and force warm air between them to rise quickly. Strong winds and heavy precipitation will occur This is the weather map symbol for an occluded front

23 Stationary Front Warm or cold front stops moving. Light wind and precipitation may occur across the front boundary This is the weather map symbol for a stationary front

24 Currents Also Affect Weather
streams of water within the oceans that move in regular patterns Warm currents carry warm water from tropics toward the poles. Cold currents bring cold water from polar zones toward the equator. The surface of the water warms or cools the air above it. The warmed or cooled air then moves over the nearby land.

26 Weather Maps Show locations of fronts, precipitation, air masses and other data Can be used to help predict weather 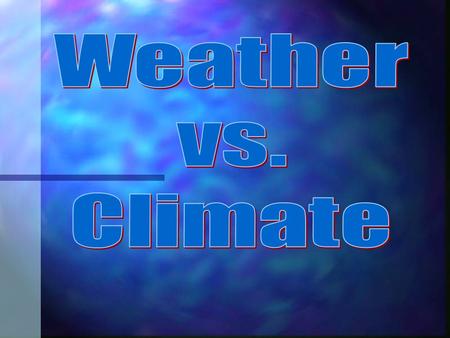