2 What causes Winds? Differences of air pressure caused by unequal heating of the atmosphere are what cause winds.

3 Measuring Measuring winds. An Anemometer is used to measure winds. The anemometer has three or four cups mounted at the ends of spokes that spin on an axle.

4 Local Winds Local winds are winds that blow over short distances. They are caused by unequal heating of the Earth’s surface within a small area.

5 Monsoons Monsoons are sea and land breezes over a large region that change direction with the seasons.

7 Global Convection Currents The movement of air between the equator and the poles produces global convection currents.

10 Doldrums Doldrums are regions near the equator with either little or no wind.

12 Trade Winds High pressure causes surface winds to blow toward the equator and away from it.

14 Polar Easterlies Cold air near the poles sinks and flows back toward lower latitudes.The Coriolis effect shifts these polar winds to the west, producing winds called the polar easterlies. 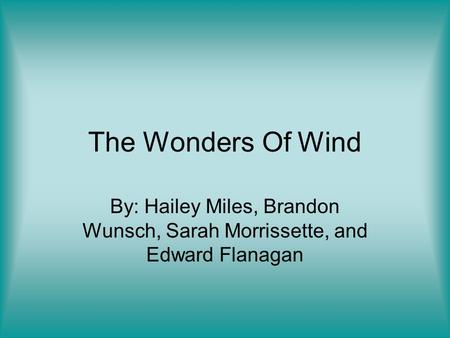